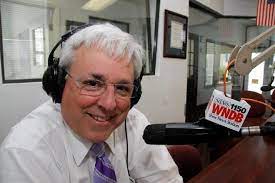 Marc Bernier was a mainstay on talk radio in Daytona.

At what point, if ever, will the ongoing toll of Covid Delta cause a deep shift in conservative anti-vaccine and anti-masking views?  We know that the numbers of people getting the vaccines are increasing dramatically.  But at what point, if ever, does a fundamental reckoning take place?  We don’t — and can’t — know.  But there is one hint.  There is literature that suggests that when 10% of a given community of views adapts a new view, the whole community tends to shift.  It is at least possible that we are nearing that point.

A conservative Florida radio host who spoke out against Covid-19 vaccines died after a weekslong fight with the virus, marking the third radio personality to die from coronavirus who publicly rejected vaccines.

The death of Marc Bernier, 65, who was a mainstay on talk radio in Daytona Beach, was announced Saturday night by WNDB, the radio station he was affiliated with for three decades.

“It’s with great sadness that WNDB and Southern Stone Communications announce the passing of Marc Bernier, who informed and entertained listeners on WNDB for over 30 years. We kindly ask that privacy is given to Marc’s family during this time of grief,” WNDB stated on Twitter.

Bernier was known for inviting differing viewpoints on his show, including Democrats, but had publicly railed against vaccines. The Daytona Beach News-Journal reported that Bernier had been hospitalized since Aug. 7.

When Florida’s Democratic Agriculture Commissioner Nikki Fried in July urged people to get vaccines on Twitter by saying the “greatest generation had to defeat the Nazis to preserve our way of life, you’re only being asked to get a shot. So be a patriot,” Bernier replied on the platform: “Should say, ‘Now the US Government is acting like Nazi’s. Get the shot!’”

Fried, who is challenging Florida Gov. Ron DeSantis in 2022, on Sunday said in a statement that “My heart goes out to his family and friends.”

On Aug. 4, another Florida conservative radio host who had criticized the coronavirus vaccine, Dick Farrel, died from Covid-19 complications. Farrel, whose given name was Farrel Austin Levitt, had worked at several radio stations in Florida, including WIOD in Miami and WPBR in Palm Beach, and had served as a fill-in anchor on Newsmax.

He had strongly condemned the coronavirus vaccine, posting on Facebook on July 3, “why take a vax promoted by people who lied 2u all along about masks, where the virus came from and the death toll?” He also criticized Anthony Fauci, the nation’s top infection disease doctor, calling him a “power tripping lying freak,” according to The Washington Post, which reported on his death.

But the Post also reports that Farrel had changed his stance on vaccines after he became infected with Covid-19. He had reportedly urged a longtime friend to get the vaccine and regretted not getting it himself.

Florida has become one of the nation’s hot spots for the virus amid the Delta variant surge. Last week, the state had more than 151,000 new infections and over 170 deaths. There are more than 16,000 people hospitalized in Florida due to the virus.

DeSantis has also maintained a hands-off approach to the virus, fighting against any attempts to require students to wear masks or businesses to require proof of vaccinations, though the governor has urged people to get the vaccine.

Last week, Phil Valentine, a 62-year-old conservative radio host in Nashville, Tenn., who had questioned the necessity of vaccines, also died from the virus. Valentine, the son of former six-term Rep. Tim Valentine (D-N.C.), had a nationally syndicated show.

“The people who instinctively believe that the government is the solution to everything are already talking vaccination mandates. This should be a personal choice,” he wrote on his blog in December. “I’m not an anti-vaxxer. I’m just using common sense.”

But like Farrel, he had reportedly changed his position on vaccines after contracting Covid-19. The radio station he was affiliated with, 99.7 WTN, posted a statement on July 23 that Valentine had been hospitalized and “regrets not being more vehemently ‘Pro-Vaccine.’”