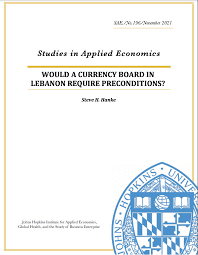 About the Series
The Studies in Applied Economics series is under the general direction of Prof. Steve H. Hanke,
Founder and Co-Director of The Johns Hopkins Institute for Applied Economics, Global Health,
and the Study of Business Enterprise ([email protected]). The views expressed in each working
paper are those of the authors and not necessarily those of the institutions that the authors are
affiliated with.

About the Authors
Jonas Herby ([email protected]) is special advisor at Center for Political Studies in Copenhagen,
Denmark. His research focuses on law and economics. He holds a master’s degree in economics
from University of Copenhagen.
Lars Jonung ([email protected]) is professor emeritus in economics at Lund University,
Sweden. He served as chairperson of the Swedish Fiscal Policy Council 2012-13, as research
advisor at the European Commission 2000-2010, and as chief economic adviser to Prime Minister
Carl Bildt in 1992-94. He holds a PhD in Economics from the University of California, Los Angeles.
Steve H. Hanke is a Professor of Applied Economics and Founder & Co-Director of The Johns
Hopkins Institute for Applied Economics, Global Health, and the Study of Business Enterprise. He
is a Senior Fellow and Director of the Troubled Currencies Project at the Cato Institute, a
contributor at National Review, a well-known currency reformer, and a currency and commodity
trader. Prof. Hanke served on President Reagan’s Council of Economic Advisers, has been an
adviser to five foreign heads of state and five foreign cabinet ministers, and held a cabinet-level
rank in both Lithuania and Montenegro. He has been awarded seven honorary doctorate degrees
and is an Honorary Professor at four foreign institutions. He was President of Toronto Trust
Argentina in Buenos Aires in 1995, when it was the world’s best-performing mutual fund.
Currently, he serves as Chairman of the Supervisory Board of Advanced Metallurgical Group N.V.
in Amsterdam. In 1998, he was named one of the twenty-five most influential people in the world
by World Trade Magazine. In 2020, Prof. Hanke was named a Knight of the Order of the Flag.

Abstract
This systematic review and meta-analysis are designed to determine whether there is empirical
evidence to support the belief that “lockdowns” reduce COVID-19 mortality. Lockdowns are
defined as the imposition of at least one compulsory, non-pharmaceutical intervention (NPI).
NPIs are any government mandate that directly restrict peoples’ possibilities, such as policies that
limit internal movement, close schools and businesses, and ban international travel. This study
employed a systematic search and screening procedure in which 18,590 studies are identified
that could potentially address the belief posed. After three levels of screening, 34 studies
ultimately qualified. Of those 34 eligible studies, 24 qualified for inclusion in the meta-analysis.
They were separated into three groups: lockdown stringency index studies, shelter-in-placeorder (SIPO) studies, and specific NPI studies. An analysis of each of these three groups support
the conclusion that lockdowns have had little to no effect on COVID-19 mortality. More
specifically, stringency index studies find that lockdowns in Europe and the United States only
reduced COVID-19 mortality by 0.2% on average. SIPOs were also ineffective, only reducing
COVID-19 mortality by 2.9% on average. Specific NPI studies also find no broad-based evidence
of noticeable effects on COVID-19 mortality.
While this meta-analysis concludes that lockdowns have had little to no public health effects,
they have imposed enormous economic and social costs where they have been adopted. In
consequence, lockdown policies are ill-founded and should be rejected as a pandemic policy
instrument.