Why haven’t cases started rising again in the U.S.?

To many people’s surprise — including mine — new Covid-19 cases in the U.S. have not begun to rise. Over the past two weeks, they have held roughly steady, falling about 1 percent, even as the highly contagious BA.2 subvariant of Omicron has become the dominant form of Covid in the U.S.

Across much of Europe, by contrast, cases surged last month after BA.2 began spreading there, and many experts expected a similar pattern here. That hasn’t happened. “It has not taken off,” Michael Osterholm, a University of Minnesota epidemiologist, told me. 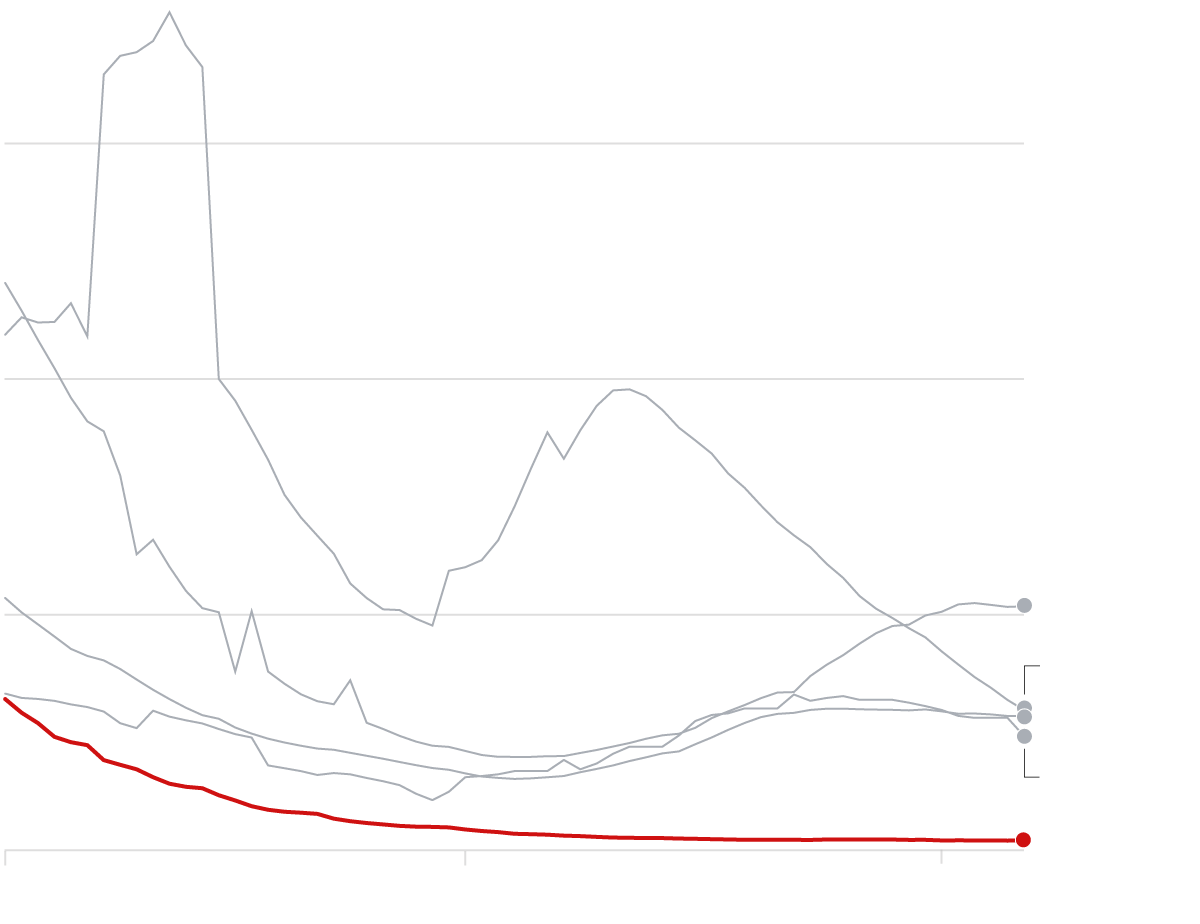 Even though the U.S. has a lower vaccination rate than Western Europe, this country may still have built up more immunity — thanks to our politically polarized response to the virus.

In liberal parts of the U.S., vaccination rates can be even higher than in Europe. In conservative communities, many Americans have been so dismissive of Covid that they have long been living almost normally. As a result, the virus has already swept through these communities, conferring at least some immunity on many people.

This laissez-faire approach has had horrible downsides. Covid death rates have been much higher in counties that voted for Donald Trump than those that voted for Joe Biden. But for people who survived a prior Covid infection, it does confer some immune protection, especially if it was recent.

“Most of Europe has been pretty Covid averse,” William Hanage, a Harvard epidemiologist, said on a recent episode of the “In the Bubble” podcast, “whereas parts of the United States have been quite Covid curious.” Hanage said that he still expected U.S. caseloads to rise soon. But, he added, “I don’t think it’s going to be as dramatic as Europe.”

If that’s correct, a preview is already visible in the Northeast, where cases have been rising lately, but not as steeply as in Europe. 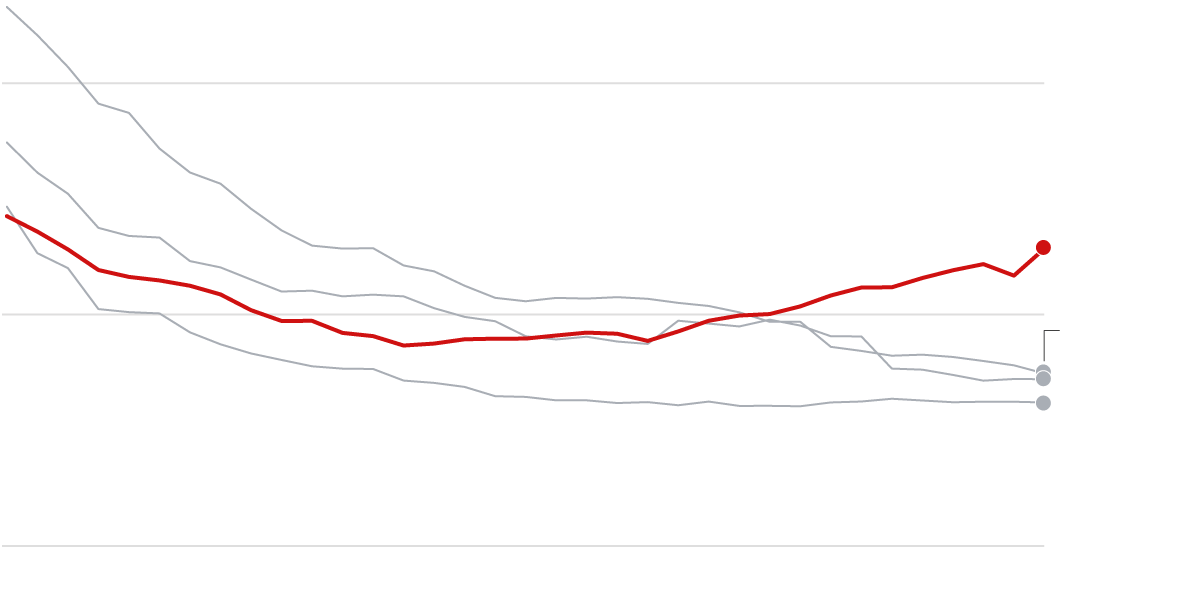 One possible reason: There are not as many Americans vulnerable to infection. The earlier version of the Omicron variant seems to have infected about 45 percent of Americans, according to Andy Slavitt, a former Covid adviser in the Biden White House. That share appears to be higher than Europe’s.

The shift toward at-home testing in recent months means that a smaller share of actual Covid cases may be showing up in the data that government agencies report and news organizations like The Times publish. The government data relies on laboratory tests.

Another potential factor depressing the volume of tests is reduced access for lower-income Americans. Some uninsured people now must pay for their own tests, and many testing clinics have closed.

All of which raises the possibility that Covid cases really are surging now, even if the data doesn’t show it.

Jessica Malaty Rivera of Boston Children’s Hospital told The Atlantic that the quality of current Covid data was “abysmal.” Dr. Scott Gottlieb, a former F.D.A. commissioner, told CNBC that he thought some parts of the country were “dramatically” underreporting cases.

This chart suggests that underreporting is a real issue. As you can see, official testing in several European countries increased as BA.2 spread, while testing in the U.S. has declined modestly.

Source: Our World in Data

Still, the shortage of testing does not seem to be the only reason that cases have not surged in the U.S. Trends in Covid hospitalizations typically lag case trends by only about a week. And hospitalizations have continued to fall in the U.S., to their lowest level in more than two years.

Even if high levels of immunity have kept cases from rising so far, the effect may not be permanent. Remember: About 45 percent of Americans were infected with Omicron, which leaves about 55 percent who were not. While many of those 55 percent may have had an earlier version of Covid, immunity can wane over time.

The current moment might be one of those times when we’re asking why cases have not begun to rise right as they begin to rise. “It may be too early to see a signal,” Jennifer Nuzzo, a Brown University epidemiologist, told me.

Throughout the pandemic, Osterholm — the Minnesota epidemiologist — has lamented that many scientists, journalists and laypeople exaggerate how much we actually know about Covid. His favorite example: The Alpha variant swept through Michigan and Minnesota last year and then largely died out, without causing case increases in other parts of the U.S. Another example: BA.2 has recently become the dominant variant in India, South Africa and some other countries without causing a spike in cases.

When I called Osterholm yesterday to ask why cases had not surged over the past few weeks, he simply said: “I don’t know, and I don’t think anybody really knows.”

Of all the variants, only the original Omicron was so contagious that it spread around the world in predictable ways, he said. Other versions of the virus have surged and receded in mysterious ways, much as a forest fire can die out without burning down an entire forest.

The bottom line: Cases still seem likely to rise, perhaps significantly, in the U.S. soon. But a new wave looks less certain than it did a few weeks ago. Regardless, the steps that can save lives in coming months remain the same: more vaccine shots, including boosters; and greater awareness of available treatments that offer extra protection for the vulnerable.