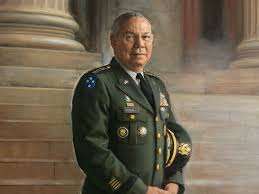 A former chairman of the Joint Chiefs of Staff, secretary of state and national security adviser, Mr. Powell died of complications of Covid-19, his family said.

Colin L. Powell, who in four decades of public life served as the nation’s top soldier, diplomat and national security adviser, and whose speech at the United Nations in 2003 helped pave the way for the United States to go to war in Iraq, died on Monday. He was 84.

The cause was complications of Covid-19, his family said in a statement, adding that he had been vaccinated and was being treated at Walter Reed National Military Medical Center, in Bethesda, Md., when he died there.

A spokeswoman said his immune system had been compromised by multiple myeloma, for which he had been undergoing treatment. He had been due to receive a booster shot for his vaccine last week, she said, but had to postpone it when he fell ill. He had also been treated for early stages of Parkinson’s disease, she said.

Mr. Powell was a pathbreaker, serving as the country’s first Black national security adviser, chairman of the Joint Chiefs of Staff and secretary of state. Beginning with his 35 years in the Army, Mr. Powell was emblematic of the ability of minorities to use the military as a ladder of opportunity.