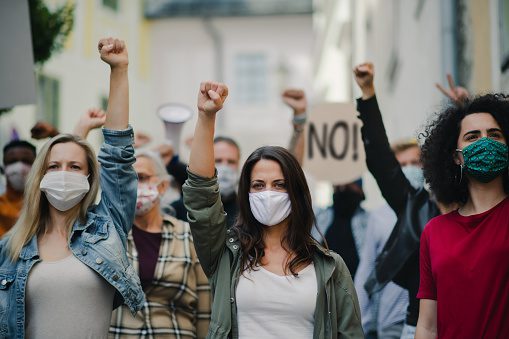 Over the weekend protests against covid mandates erupted on an international scale. On Saturday, thousands of people were demonstrating in European capitals. Demonstrations took place in Paris, London, Helsinki, Athens, and Stockholm. The European protests were followed by an anti-vaccine-mandate March in Washington D.C. on Sunday.  That rally, while systematically censored by social media in what can only be described as an anti-democratic display by companies such as YouTube and Facebook, was anticipated to draw tens of thousands of doctors, researchers, and health care professionals dedicated to medical choice. The ultimate turnout was considerably less than projected.

The demonstration in Paris drew hundreds of protesters who oppose the introduction of a new vaccine pass in France on Monday. The vaccine pass will restrict the lives of the unvaccinated and will not allow them on domestic flights, in theaters, bars, and sporting events. Demonstrations took place in other French cities as well. France’s President  Emmanuel Macron has been on the record declaring that he wants to “piss off” the unvaccinated.

In Stockholm, about 3000 people marched against the “vaccine certificate” which is needed to attend events with more than 50 people. The Stockholm protest was monitored by the Swedish police due to the possibility of “right-wing extremists” turning the demonstration violent, but no incidents were reported. Some of the protesters did carry a neo-Nazi banner. There was also a demonstration in the city of Goteborg which drew about 1000 people.

In Finland, about 4000 marched through the city of Helsinki. Finland introduced covid restrictions in December requiring vaccine passports in order to enter restaurants and public events. The event in Helsinki was organized by a group called Worldwide Demonstration.Subscribe to the Trialsitenews “COVID-19” ChannelNo spam – we promise

In London, workers for the National Health Service (NHS) joined vaccine protesters in a demonstration and some of the NHS workers left their “scrubs” on Downing Street outside the Prime Minister’s residence. More than 80,000 workers in the NHS, about six percent of the workforce are unvaccinated. On February 4th they’ll be told they need to get vaccinated, or they’ll lose their jobs.

These are not the first demonstrations in Europe. In November, lockdowns were protested, and there was some violence. December saw more protests, and they are continuing into January. Though previous demonstrations happened in many European cities this is the first time they’ve appeared on another continent on the same weekend.

In Washington D.C. 20,000 or more people were expected to attend the anti-mandate rally, yet that figure turned out to be substantially lower—perhaps between 2,500 and 5,000 attendees showed up.

Speakers appealed to important democratic principles and the right to medical choice while comparing the vaccine mandates to types of policies associated with ‘totalitarian regimes’ including the most egregious in history. TrialSite’s correspondents attending the event report the event’s turnout was inspiring on the one hand but overall, disappointing in terms of turnout.

Moreover, elements of a more fringe political right-wing were present, albeit in relatively small numbers. While suppression and censorship of channels such as Facebook could be one explanation for the subpar turnout, event organizers and key participants used LinkedIn and Substack extensively to get the message out. The former social network represents the largest professional social network worldwide.

Mary Beth Pfeiffer, a contributor to the TrialSite tweeted several pictures from today’s Defeat the Mandates event.  She tweeted “Today’s Defeat the Mandates event was inspiring, emotional, hopeful, and sometimes angry. In short, democracy and free speech in action. We need more of this. A lot more in every city.” Ms. Pfeiffer will provide a thorough report on the event for TrialSite.