Natural immunity alone much weaker than recovery-plus-shot, mass peer-reviewed research finds; before Omicron, those with ‘hybrid’ protection were 82% less likely to be reinfected

Israelis who recovered from COVID-19 and were vaccinated with a single dose of the Pfizer-BioNTech vaccine are far better protected against reinfection than those who only have natural immunity, a large-scale Israeli study found.

The study, published this week in the Annals of Internal Medicine, reported those who were vaccinated after infection were 82 percent less likely to contract the virus following their initial bout.

The study also found people who received a vaccine shot after recovering from COVID-19 were 76% less likely to have a symptomatic case of coronavirus than those who were unvaccinated.Keep Watching

The research was based on a sample of nearly 108,000 Israelis aged 16 and over who were infected before having been vaccinated, making it the largest study of its kind. The data were from just before the Omicron wave, when reinfections of recovered patients were relatively rare, and while they provide a picture of infection patterns, the study’s authors said hospitalization rates were too low to draw conclusions on serious illnesses.

The study focused on people who caught the coronavirus before getting vaccinated, comparing those who got a single vaccine shot afterwards to those who did not. The research was limited to those who received one shot even though many Israeli convalescents have been administered more, as a single dose is the minimum recommended for recovered patients in Israel and many other countries.

The peer-reviewed study was conducted by the research arm of Maccabi Healthcare Services.

As the study drew on data from before Israel’s fifth major outbreak, it does not give any insight on immunity among people who recovered from the Omicron variant of coronavirus. Many Omicron convalescents have received two or three vaccine doses, making it possible they could have an even higher level of extra protection than unvaccinated convalescents, but the study made no predictions on this.

Yet despite not covering the Omicron wave, the researchers believe the study makes a strong argument for a general principle that the “hybrid” immunity among vaccinated convalescents provides much better protection against COVID-19 than natural immunity alone.

“We see that convalescent patients are more protected if they get vaccinated once than if they aren’t vaccinated,” the team, led by Dr. Sivan Gazit and Dr. Tal Palaton, told The Times of Israel. 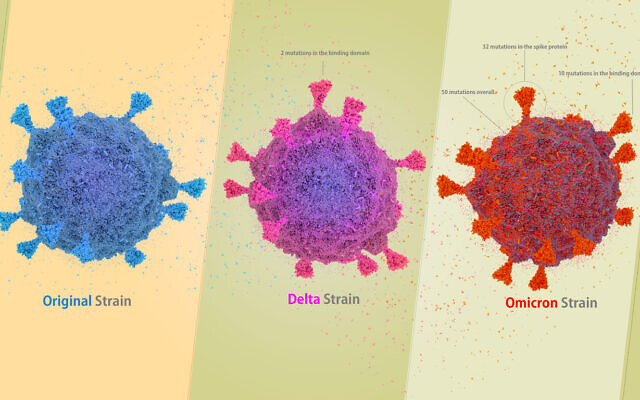 An illustration showing the evolution of the main coronavirus variants that infected Israel. (CIPhotos via iStock by Getty Images)

“In addition, there was a decreased risk for symptomatic disease among persons who were previously infected and vaccinated.”

The Israeli medical community lauded the research as significant, especially as it comes when there are far more newly recovered patients, a disproportionate number of whom are unvaccinated. In many cases, after recovering the virus, these people have a stronger belief that they do not need a vaccine.

Epidemiologist Hagai Levine, chairman of the Israel Association of Public Health Physicians, told The Times of Israel that he considers the research “important.”

Levine, who was not involved in the research, said that while it’s hard to infer what it means for Omicron convalescents, “it is to be hoped that the extensive scope of infection and vaccines will be an at least partial protective layer against future variants.” He stressed that this will need to be tested in real life.

Dr. Yariv Wine, a virus expert from Tel Aviv University, who also wasn’t involved in the study, told The Times of Israel: “This publication makes a lot of sense. The basic idea upon which vaccine science is built is ‘training’ the immune system to respond to a specific pathogen in a way that would mimic the stimulation necessary for immune development but would not produce active disease.

“In light of the recurrent COVID-19 morbidity waves, it is of particular importance to understand how the immunity that follows natural infection differs from the immunity following vaccination,” Wine added.

He said the new study progresses this understanding, making it clear that patients who recovered and took a single dose “benefit from both full systemic activation of the immune system, natural infection, together with enhanced antibody production thanks to the vaccine.”