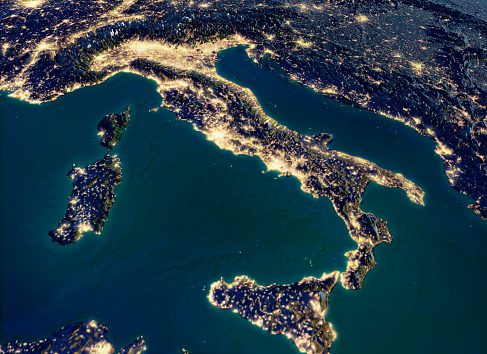 In Italy, with its high vaccination rate, the social schism revolves less around who’s gotten a shot, and more around lifestyles and comfort levels of living with the coronavirus.

ROME — The entire family is vaccinated, even the relatives, and all abide by masking requirements and respect Italy’s tough coronavirus restrictions. They are also all over the place in how they are living their lives.

Mariagiovanna Togna is willing to accompany her children to outdoor play dates after school. But her husband, more anxious by nature, is still wearing rubber gloves, wiping down groceries and turning away visitors. One of her sisters in Rome is more laid back and goes to yoga class and to work, and her 15-year-old daughter had a birthday party indoors. Her brother, in the northern region of Trento, who finally agreed to get vaccinated, she said, to keep going out to bars, recently vacationed along the Amalfi Coast. But when Christmas vacation rolled around, their parents, in their 70s, asked him to stay in a bed-and-breakfast.

Everyone who went home to Benevento had to take a rapid test, including another sister, who depends on their mother for babysitting. Even though the government shot down the efforts in the Campania Region, where she lives, to delay in-person school, she prefers to keep her child out of nursery school.

“We are all vaccinated, many with the third dose already, we all have a civic sense about being careful for ourselves and for others,” she said. “But we have different styles of life.”

As the Omicron variant of the coronavirus personally touches or swirls around so many individuals, vaccinated and largely protected families are strained by varying comfort levels. It is much the same the world over, especially where significant portions of the population have been vaccinated, like Italy, which now has one of the highest rates in the world.

Initially slammed by the virus, Italy today holds the promise of a near future where the schism in society is no longer between the vaccinated and the unvaccinated, or the socially responsible and the scofflaws, but between the risk takers and the risk averse.

For many with booster shots, life has become a constant negotiation between those who want to resume dining in restaurants, those still reluctant to accept deliveries and those who just want to get the virus already and get their mandatory quarantines over with.

For many vaccinated families, the recent holiday season and New Year’s celebrations hammered those variations home, as teenagers stumbled in after parties to take a swab test and reunite with shut-in uncles petrified of the virus, or grandparents unsure just how protected their booster shots left them. In Italy, where generations of families often see one another, and frequently live together, navigating the vagaries of Omicron decorum is a constant exercise.

“In my world, there are no no-vax,” said Giuseppe Cavallone, 73, who walked in the Villa Doria Pamphili park in Rome with his wife. But that did not mean they lived carefree. They had given up on going to the movies, in part because of the discomfort of wearing a mask for three straight hours, and had abandoned their annual travel to Paris and London. But their son, also fully vaccinated, was less cautious, flying to Patagonia for vacation.

“The young feel much more free,” said Mr. Cavallone’s wife, Maria Teresa Pucciano, 74. She added that they recently went to a wedding, but a friend of theirs stayed outside in the cold the whole time.

An increasing number of people who have received a third vaccine dose have, emboldened by the apparent light symptoms of Omicron for the vaccinated, entered a bring-it-on phase of the pandemic. Some are trying to time their resulting quarantines to a social and school calendar, or to have infections coincide with those of friends. Others are instead still coming to terms with a virus that is seemingly everywhere, and forcing themselves to adjust their comfort levels and do more, to be more social, to even dine inside an actual restaurant.

On a recent Sunday at the Il Cortile restaurant in Rome, where the front door bore a large reminder that all diners needed to present a health pass and its proof of vaccination, Isabella Carletti, 65, got up from lunch with her husband and walked outside.

“I felt uncomfortable in there, I wanted to get some air,” she said. “We usually book outside, but we couldn’t find a table.”

She lit a cigarette and suggested the smoke was “less dangerous” than the air inside. But then she went back in.

The Italian government has gradually tightened the screws on the unvaccinated, and on Tuesday, new restrictions will come into force requiring vaccination for people 50 and over.

“Most of the problems we are facing today depend on the fact that there are unvaccinated people,” Prime Minister Mario Draghi said. He added that “unvaccinated people have a much higher chance of developing the disease and severe forms of the disease” and were putting hospitals under pressure.

To force vaccinations, the health care system will forward the names of the unvaccinated people over 50 to tax authorities so they can be fined. But the real deterrent remains the isolation from public life, with everything from entering a cafe to taking a public bus or going to work banned for the unvaccinated.

Since the government announced its plans, around 600,000 people a day, about 1 percent of the population, have received a dose of a vaccine, including the now 45 percent of Italians who are receiving their third dose. But among them are also about 60,000 to 90,000 people who are receiving their first dose. Many are probably children, but the government is also confident the new rules are motivating more people over 50, who are more vulnerable, to be vaccinated. There are still an estimated 10 percent of Italians who are unvaccinated, many in their 40s and 50s.

Advocates for a speedier vaccination campaign would like the government to mandate the vaccine to people 40 and up, as about 15 percent of 40-year-olds remain unvaccinated. But the current delicate political moment — in the wake of a destabilizing election for president — has put that off for now. In any case, the government is pleased with the progress.

Maria Claudia Di Paolo, 71, and her husband, Natale Santucci, also 71, said they, too, had been encouraged by the success of Italy’s vaccination campaign and worried that the vaccine skeptics were getting too much attention. The couple, who contracted Covid last year after having friends over for dinner, decided recently to have their first nonrelated guest over for a meal.

Then the guest, a doctor like Mr. Santucci, called to say that one of his patients had tested positive, but he himself had tested negative and could still come.

“We said, ‘Better to wait,’” said Mr. Santucci, who added that the couple had moved their weekend family lunches to an outside table at a local restaurant. But they did celebrate Christmas together at home with their children and grandchildren, spaced apart at a big table, avoiding hugs and kisses and feeling out everyone’s comfort level. “There is a great variability inside the vaccinated families,” he said.

Ms. Togna said that she felt isolated and at wit’s end. Seeing so many people around her infected, quarantined and then going on with life, she said, had encouraged her to try to move ever so slightly off the extremely cautious end of the spectrum. But it was hard.

“On one side, I think I have to change my behavior, and drag my whole family along, but it will be very difficult,” she said. “Even if it’s endemic, there is always the risk.”