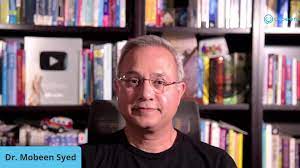 Dr. Mobeen Syed aka “Dr. Been” has become a sensation on YouTube educating millions on various medical topics during this difficult pandemic including refreshingly sincere lessons on topics such as ivermectin. Most recently the online doc raised concern over the inconsistent criteria applied in ivermectin and molnupiravir trials in the quest to get authorization for the treatment of COVID-19. TrialSite has covered Dr. Been’s previous examinations of potential COVID treatments, including how his YouTube channel was censored for discussing information related to hydroxychloroquine, remdesivir, and ivermectin.

In a YouTube video streamed on October 7, 2021, Dr. Been contrasts the methods used by the FDA and CDC for approval of COVID treatments. Dr. Been emphasizes the lack of impartiality, and preferential treatment in the recommendation guidelines by the FDA and CDC.

He claims that there are clear signs of preferential allowances in the molnupiravir trial and in other recommended drugs (remdesivir, bamlanivimab) when applying for emergency use authorization (EUA). Meanwhile, ivermectin clinical trials are repeatedly disqualified.

Previously, TrialSite news reported on researchers at Emory University who discovered molnupiravir in 2014. With time, it demonstrated efficacy against several viruses including coronaviruses.

In-vitro studies for molnupiravir on human cells against SARS-CoV-2 were done in 2020. After combining Phase II & III study in their clinical trials, Merck halted clinical trial expansion in October 2021. The pharmaceutical company declared efficacy had been demonstrated, and they were now ready for an EUA.

Dr. Been’s YouTube video clarifies several questions by a comparison with study trials from other drugs.

Is one study trial sufficient for an EUA?

The fact that a single trial is being considered to grant molnupiravir an EUA is sending signals of preferential treatment. But, this is not a precedent: bamlanivimab was also granted EUA on the basis of a single trial in November 2020.

But Dr. Been raises another concern related to an amendment of the EUA granted for bamlanivimab in September 2021. The BLAZE-1 trial researched bamlanivimab and etesevimab used together in treatment of early or mild infection with COVID-19; the BLAZE-2 trial investigated bamlanivimab alone as post-exposure prophylaxis.

Dr. Been suggests that the FDA’s position on quality of evidence is inconsistent when it comes to COVID-19.

For example, open label trials allow the investigator and participants to know who is receiving treatment or placebo. The use of open-trials leaves room for bias and is criticized as low-quality evidence, but these trials were accepted in support of remdesivir’s EUA. Remdesivir also drew criticism from meta-analyses and a WHO study for its lack of effectiveness, specifically in patient survival. Nevertheless, remdesivir is still approved for COVID-19, while ivermectin fails to get the nod, despite numerous double-blinded trials – a higher standard than open trials.

Dr. Been points to the ubiquitous problem of low quality of evidence, using a study analyzing Infectious Diseases Society of America (IDSA) clinical practice guidelines. The study contends that the IDSA failed to comply with adequate standards for recommendation using high-quality evidence.  For instance, low-quality evidence from non-randomized studies and expert opinions was used to support 50% of recommendations. Observational studies were used in 31%, while only 16% of recommendations were based on one or more randomized controlled trials.

It should be noted, however, that the study presented by Dr. Been on this point was published in 2010 and may not accurately represent current conditions.

Another question raised was the use of pre-print data in assessing drug efficacy and safety. A pre-print dated September 30, 2021 was referenced in a CDC article on the effectiveness of the AstraZeneca-Oxford vaccine (ChAdOx1) against SARS-CoV-2. At the time of reference, it was not peer-reviewed, a disqualifier that has continually been used against other orphan drug studies.

Do We Use Drugs Proven Ineffective in Other Studies?

Typically, if a reliable study proves that a drug is ineffective against a particular indication, the drug is precluded from use against that indication. TrialSite reminds the World Health Organization (WHO) rejected the use of remdesivir due to the results of the Solidarity trial indicating no clinical benefit in October 2020.

Nevertheless, the drug was still granted an EUA by the FDA later that month. Additionally, a July 2021 Bayesian re-analysis showed three comparable studies of remdesivir having “statistically non-significant results”. The results of these studies have not precluded the use of remdesivir in treatment of patients with COVID-19.

Comparison of Molnupiravir and Ivermectin

Dr. Been went on to compare the evidence surrounding the use of molnupiravir and ivermectin in COVID-19 treatment. The results are summarized in the table below:

*TrialSite advisor Michael Goodkin as well as several others have declared that the NIH embrace of ivermectin in the ACTIV-6 trial is questionable—the dosage regimen appears too low for success, and we note the decision to include was late in the pandemic.

As previously reported on TrialSite, molnupiravir has received incredible perks compared to other trial drugs including conditional orders prior to clinical trial and governmental funding. Though both ivermectin and molnupiravir demonstrate anti-viral efficacy against SARS-CoV-2, ivermectin studies are repeatedly sidelined and disqualified.