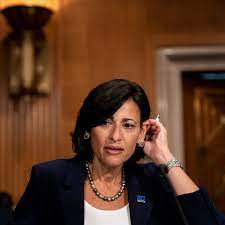 Dr. Rochelle Walensky, the director of the Centers for Disease Control and Prevention, has stumbled in explaining her policy decisions.

Two days before Christmas, with the Omicron variant driving a near-vertical rise in new coronavirus cases, the director of the Centers for Disease Control and Prevention alerted the White House that she planned to recommend that people infected with the virus isolate for five days instead of 10.

The director, Dr. Rochelle P. Walensky, had faced previous criticism for issuing recommendations that confused the public and in some cases caught the White House off guard. Determined to avoid that this time, she briefed other top Biden health officials on her proposal so they would all be on the same page, according to two people familiar with her actions.

It did not work out that way. Dr. Anthony S. Fauci, the nation’s top infectious disease expert, and Dr. Vivek H. Murthy, the surgeon general, were concerned that the new guidance did not urge people to get a negative Covid test before ending their isolation. After the new recommendation became public, they both took issue with it on national television, saying they expected the C.D.C. to clarify its advice.

On Wednesday, nine days after the guidance was issued and a day after it was slightly modified to include some advice on testing, the C.D.C. was still having a hard time explaining itself. “How do you expect people to keep track of what they can and can’t do?” a CNN reporter demanded of Dr. Walensky at a White House briefing.

It was a familiar refrain.

President Biden came into office vowing to restore public trust in the C.D.C. after the Trump White House had tied the agency’s hands and manipulated its scientific judgments on the pandemic for political ends. Yet in his first year of battling the coronavirus, Mr. Biden has presided over a series of messaging failures that have followed a familiar pattern, with Dr. Walensky and her team making what experts say are largely sound decisions, but fumbling in communicating them to America.

Dr. Walensky, a highly regarded infectious disease expert from Boston with no prior government experience, insisted in February that schools must keep students six feet apart; in March, she said three feet was enough. She said in February that teachers did not need to be vaccinated to reopen schools; the White House said the next day that she was speaking “in her personal capacity.”

With the virus throwing one curveball after another, changing advice from the C.D.C. is a given. But Dr. Walensky’s critics say the C.D.C.’s recommendations are sometimes so confusing or abruptly modified that they seem more like drafts than fully vetted proclamations.

“I don’t think that the C.D.C. guidelines were significantly wrong,” Dr. Tom Frieden, the agency’s director under former President Barack Obama, said of the latest recommendations on isolation for those with Covid. But he added, “I think the way they were released was very problematic.”

The crux of the problem, several administration officials said, is a failure by the C.D.C. and the Biden administration’s messaging experts to work in concert. Who is to blame for that is a matter of debate. Dr. Walensky’s critics say she is not collaborative enough, too often springing decisions on other federal officials who then struggle to defend them in public. Her defenders say she strives to coordinate, but that it is not her job to ensure consensus across the entire administration.

Some suggest the White House has gone too far in its hands-off, let-the-scientists-rule approach, leaving a vacuum of leadership and forcing ad-hoc coordination between the various public health agencies. That has been exacerbated by a health secretary, Xavier Becerra, who receives routine briefings from scientists but does not settle interagency disputes about the pandemic response.

Dr. Fauci, the administration’s best-known spokesman on the pandemic, has further muddied the waters at times, publicly contradicting the C.D.C. as he did this week or making statements he has later walked back.

He said in late December, for instance, that a vaccination requirement for domestic airline passengers should be seriously considered, leaving the White House to field a flurry of questions on a policy it was not prepared to recommend. Later, he said a mandate was unlikely.

On Wednesday, Jen Psaki, the White House press secretary, said it was OK for the C.D.C. to modify its guidance, adding that, for one thing, “if they hadn’t changed their recommendations over the course of time, schools would probably be closed across the country.”

But even some within Dr. Walensky’s own agency agree that the C.D.C.’s public pronouncements on the pandemic have repeatedly fallen short, long after experts say the agency should have mastered clear and concise public messaging on the worst public health crisis in a century.

The handling of the isolation guidance was a case study in how to confuse the public. And the controversy is not over: health experts continued on Wednesday to criticize the C.D.C.’s decision not to recommend a negative test before people with Covid end a five-day isolation.

“The new recommendations on quarantine and isolation are not only confusing, but are risking further spread of the virus,” the American Medical Association said in a statement on Wednesday.

Dr. Walensky said that she and career staff finished devising the guidance over the Christmas weekend. Officials decided that people with Covid-19 could end their isolation after five days instead of 10 if they were asymptomatic or if their symptoms were “resolving,” meaning no fever for 24 hours. The agency said 85 to 90 percent of viral transmission occurred within that initial five-day period.

Dr. Walensky verbally briefed other senior federal officials on the new guidance at least twice that weekend, defending her decision not to recommend that people test negative first. One person familiar with Dr. Walensky’s account said no one raised serious objections.

But Dr. Fauci said in an interview that he did not see the final version before it was released. Others familiar with the situation said the C.D.C. did not share it before posting it publicly on Dec. 27.

Although the Food and Drug Administration now typically holds a news briefing after major regulatory moves on Covid vaccines or treatments, the C.D.C. held no briefing on the decision. Indeed, it has not held regular news conferences since former President Donald J. Trump put an end to them in early 2020. Dr. Walensky does take questions at least once a week during the White House’s pandemic news briefings.

The agency’s minimalist explanation immediately set off a fraught debate: Why not recommend a negative test before ending isolation? Was it because tests were in short supply? Was the agency shortening the isolation period to keep the economy running instead of for science-based reasons?

“Where the messaging gets muddled is where it is unclear what is driving the decision,” said Dr. Celine R. Gounder, an infectious disease expert at Bellevue Hospital Center in New York who considers Dr. Walensky a mentor.

Dr. Gounder said she and other experts suspected that a shortage of tests was behind the decision, and that if Dr. Walensky had said so, “the public health community would have been more understanding.” Dr. Walensky said Wednesday that the guidance had “nothing to do with the shortage of available tests.”

In an interview with The Times last week, Dr. Walensky said the advice was carefully crafted with a team of career officials. She said rapid tests were meant to diagnose infection, not predict the risk of spreading it — a position echoed by the F.D.A., which regulates the tests.

“They’re not authorized for that use. They haven’t been studied for that,” Dr. Walensky said. “So, in my sort of clinical judgment, and my public health judgment, you don’t necessarily do a test if you don’t know what you’re going to do with the results.”

In an interview Tuesday evening, Dr. Fauci said he favored a testing recommendation because a positive test was “very much associated” with the virus replicating in a person’s nose and throat — an indication of infectiousness.

Dr. Fauci said he had shared his opinion with Dr. Walensky in “very collegial, cooperative conversations” in which they discussed amending the guidance.

In the end, the agency largely stuck to its stance. But the more detailed guidance, issued on Tuesday, states that if people with Covid have access to testing and want to be tested, the best approach is to take a rapid test near the end of the five-day isolation period.

Asked why she changed it, Dr. Walensky said at Wednesday’s White House briefing that “it became very clear that people were interested in using the rapid test” and therefore it made sense to tell them how best to use it.

Dr. Frieden said there were three rules to putting out public health guidance: it must be technically correct, simple and workable in the real world.

Dr. Walensky certainly had real-world implications to consider: Would it make sense to recommend that people take Covid tests, when they are so hard to find? And with so many people getting infected with Omicron, encouraging them all to stay home for longer than five days could cripple the economy.

“Why do you put in place a recommendation that citizens can’t actually fulfill?” asked Michael T. Osterholm, an infectious disease expert at the University of Minnesota who supports Dr. Walensky’s initial guidance.

Dr. Frieden, who led the C.D.C. for eight years — including during the Ebola crisis — said that in developing new guidance, he would first circulate it within the government to develop consensus among top officials. Then he would hold what he called a “murder board” — a mock question-and-answer session — to “practice for really tough questions.”

Then, joined by subject-matter experts, he would face reporters. He said it was not inappropriate for the White House to offer the C.D.C. messaging advice, so long as it did not interfere in scientific decisions.

In an interview with The Times last month, Dr. Walensky said she had been working on improving coordination with the White House and other federal health officials, especially since May, when her statement that vaccinated people no longer needed to wear masks took some by surprise.

“I didn’t have the relationships at the time then that I even have now, and certainly there are many more people in government who have many more relationships than I do,” she said. “And so that has been a learning curve.”