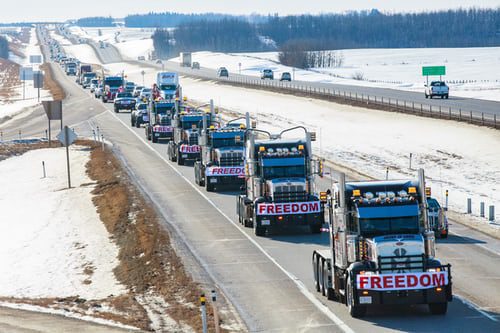 The Canadian “Freedom Convoy” of truckers now appears to be a worldwide form of protest. In France, a “Convoi de la Liberte” (Freedom Convoy) has started driving from the south of France toward Paris. Protesters are demonstrating against France and Europe’s vaccine pass, which prevents the unvaccinated from attending theaters, movie houses, and eating in restaurants. The French convoy plans to drive on from Paris to Brussels, the capital of Belgium and the headquarters of many European Union institutions. These protests are not new to France. The country had anti-pass and mandate protests in several cities, even though only 8% of the French population remains unvaccinated.  The Convoi de la Liberte started in the southern city of Nice with many protesters stocking up on food and were given detailed maps of Paris by the organizers.

Paris police have vowed not to allow the drivers to enter the capital. Drivers from other cities in France are expected to join the motorcade, which includes trucks, cars, and motorcycles all protesting COVID-19 restrictions. Protesters who are caught by the police receive a two-year prison sentence, a fine of 4500 Euros ($5100), and a three-year ban from driving.

The French protest is a copy of the Canadian Freedom Convoy which appears to be effective. The premier of Ontario has declared a state of emergency as the capital city of Ottawa is about to enter its third weekend of the trucker blockade. The Canadian protest extends beyond the capital to other parts of the country and has shut down thoroughfares to the United States blocking highways and bridges threatening the flow of goods and trade between the two countries. What started as a protest targeting vaccination requirements of truckers traveling between the North American neighbors has turned into a demand for Prime Minister Justin Trudeau to resign. The Canadian government is now threatening fines of up to $75,000 and a year in prison if the protest continues. Also, while trucker donations were usurped by GoFundMe, they moved to seize another funding site. Media reports that the Ontario Superior Court of Justice issued an order stopping access to the funds at the Christian-oriented “GiveSendGo website.

The Canadian protest may spread south. A planned “American Freedom Convoy” could start as early as Super Bowl Sunday with plans to possibly disrupt the big game. The U.S. Department of Homeland Security has issued a warning the protest could “severely disrupt transportation, federal government, and law enforcement operations through gridlock and potential counter-protests”. Subscribe to the Trialsitenews “SARS-CoV-2” ChannelNo spam – we promise

Facebook has shut down several groups supporting the demonstration. The American truckers have plans to start with the Super Bowl or perhaps by early March in Los Angeles and then drive across the country and arrive in Washington D.C. in time for President Joe Biden’s State of the Union address.

Other reports of truck-driven protests now surface in other nations—from Austria in Europe to Australia in Oceania. For example, in Austria, the government issued a ban on vehicular-based protests as hundreds of vehicles were to converge in downtown Vienna. The government in that German-speaking country plans to enforce prohibitions of this class of protest based on the environmental commotion (e.g., noise pollution) such an event could cause.

In the meantime, major marches continue in Australia, this time in Canberra, the nation’s capital. While the protestors are pegged as “antivaxxers,” it appears that the biggest focal point centers on the mandates and restrictions on freedoms.

In the meantime, just a few days ago on Thursday, clashes between protestors and police on the grounds of the country’s parliament led to dozens of arrests. Marchers had seized the legislature for three days with activists repeating a Maori chant “hold the line” as scuffles with the line police intensified; the police were charged with breaking up the protest contingent.

In New Zealand, protestors are standing against vaccine requirements against a range of professions including teachers, frontline health workers, police and the military.

Though this is not the first of international protests against COVID-19 decrees, it seems as if the “Freedom Convoys” have been the most effective demonstration, to this point, against mandates. For example, possibly due to the mounting social pressure, some provinces back in Canada are planning on dropping the mandates such as Saskatchewan Premier Scott Moe who announced this past Tuesday that by Valentines Day (February 14th), the province will remove all vaccination requirements. But other locales remain resolute that they’ll take a more guarded, incremental approach.