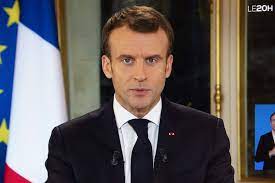 French President Emmanuel Macron has refused to take back his recent controversial comments on the unvaccinated in France.

Macron acknowledged his use of coarse language while referring to the country’s unvaccinated population may have upset some, but said he takes full responsibility for it, according to The Associated Press.

“When some make from their freedom … a motto, not only do they put others’ lives at risk, but they are also curtailing others’ freedom. That I cannot accept,” he said in reference to unvaccinated people.

Macron made comments last week saying he wanted to “piss off” unvaccinated people while calling those who choose not to get the COVID-19 jab “irresponsible.”

French Parliament is debating a new policy that will require people provide proof of vaccination to ride the train or enter places like a restaurant or cinema.

French residents have previously been required to provide either a negative COVID-19 test or vaccine proof for entry into certain venues for months, but the new bill will remove the option to provide a test result and require vaccination.

Some have noted that Macron, who is up for reelection in April this year, possibly thought his comments would go over well with people who are already vaccinated and are frustrated with those who will not get their shot.

However, he said he will only declare his intentions to run for reelection once he is sure, he said in an interview with the Le Parisien newspaper published Tuesday, Agence France-Presse reported.