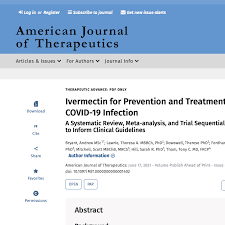 To the Editor:
Our meta-analysis of trial data on ivermectin for prevention and treatment of COVID-191 is potentially affected by a recent newspaper article2 making 2 significant claims. First, the preprint manuscript by Elgazzar et al3 has been withdrawn; second, “if you get rid of just this research, most meta-analyses that have found positive results would have their conclusions entirely reversed.” The first claim seems untrue at this writing and the second unsustainable. The preprint server Research Square makes explicit3 that the preprint was not withdrawn by the authors but removed on receipt of a complaint, and Prof. Elgazzar has confirmed4 that this was without any opportunity of reply. The complaints have been denied as defamatory, and his manuscript is said to remain under review for publication elsewhere. Currently, these claims and counterclaims have appeared only in news and social media and have had no independent adjudication. Our inclusion of Elgazzar3 was in full conformity with the PRISMA guidelines5 which encourage the use of unpublished data, supported where necessary by direct author inquiries, to ameliorate tendencies to publication bias. Such inquiries were indeed made during the review process. Where satisfactory clarification was received, the data were included. We had no basis for excluding a trial that met the inclusion criteria of our review protocol. This applied equally to the study by Lopez- Medina et al6 that has also received postpublication criticism7 for its trial protocol violations (with different consequences to the analysis) but likewise met our review protocol inclusion criteria. The mechanism in systematic reviews for noting doubts over reliability lies in the risk of bias assessments, made appropriately in both cases. Pending clarification of data reliability in the study by Elgazzar et al,3 we turn to the second claim made in the press2 that conclusions are reversed if this study is

Repurposed medicines may have a role against the SARS-CoV-2 virus. The antiparasitic ivermectin, with antiviral and anti-inflammatory properties, has now been tested in numerous clinical trials.

We assessed the efficacy of ivermectin treatment in reducing mortality, in secondary outcomes, and in chemoprophylaxis, among people with, or at high risk of, COVID-19 infection.

Meta-analysis of 15 trials found that ivermectin reduced risk of death compared with no ivermectin (average risk ratio 0.38, 95% confidence interval 0.19–0.73; n = 2438; I2 = 49%; moderate-certainty evidence). This result was confirmed in a trial sequential analysis using the same DerSimonian–Laird method that underpinned the unadjusted analysis. This was also robust against a trial sequential analysis using the Biggerstaff–Tweedie method. Low-certainty evidence found that ivermectin prophylaxis reduced COVID-19 infection by an average 86% (95% confidence interval 79%–91%). Secondary outcomes provided less certain evidence. Low-certainty evidence suggested that there may be no benefit with ivermectin for “need for mechanical ventilation,” whereas effect estimates for “improvement” and “deterioration” clearly favored ivermectin use. Severe adverse events were rare among treatment trials and evidence of no difference was assessed as low certainty. Evidence on other secondary outcomes was very low certainty.

Moderate-certainty evidence finds that large reductions in COVID-19 deaths are possible using ivermectin. Using ivermectin early in the clinical course may reduce numbers progressing to severe disease. The apparent safety and low cost suggest that ivermectin is likely to have a significant impact on the SARS-CoV-2 pandemic globally.