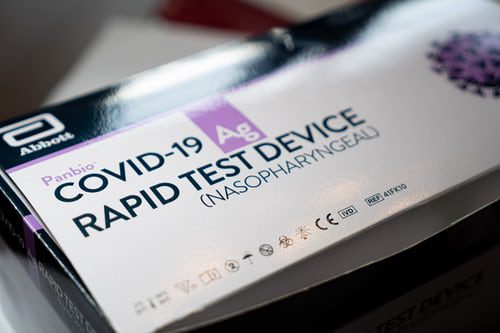 When Psaki scoffed at the idea of sending Americans free Covid-19 rapid tests, it was a reminder that a for-profit health care system still limits the U.S. pandemic response.

PUBLIC HEALTH EXPERTS were appalled Monday to hear an idea that many of them consider vital — making at-home rapid antigen tests for Covid-19 free for all Americans — dismissed as ridiculous by President Joe Biden’s press secretary, Jen Psaki.

In an oddly combative exchange with Mara Liasson of NPR, who asked why the United States chose not to emulate countries like the United Kingdom, which sends packs of seven free rapid tests to anyone who asks for them, the president’s spokesperson first suggested, wrongly, that the tests used in other countries might not work. Psaki then boasted that the U.S. had gotten some retailers to lower costs and would soon require private insurance companies to start reimbursing clients who buy rapid tests.

Many are ridiculing this dismissive and out of touch take by @PressSec on Covid tests.

But for me it’s the ‘how much does it cost’ part.

We spent BILLIONS AND BILLIONS on vaccines that we would never consider charging for.

Tests should be no different.pic.twitter.com/bf7JnpYTbH

“Should we just send one to every American?” Psaki shot back, her voice dripping with sarcasm.

“Then what happens if you, if every American has one test? How much does that cost?” Psaki asked, suggesting that sending Americans tests to regularly screen themselves for the virus would be prohibitively expensive.

Experts who have pushed for the Biden administration to flood the country with free rapid tests, as a way of finding asymptomatic cases to slow the spread of the virus, were particularly outraged that the president’s spokesperson suggested that the initiative would be too costly.

“By dismissing the idea of sending every American a rapid test due to cost, she seems to imply that the insurance reimbursement plan won’t come close to doing that,” Jennifer Nuzzo, lead epidemiologist for the Johns Hopkins Coronavirus Resource Center, commented on Twitter. Nuzzo had complained to The Hill earlier this week that the administration was placing “barriers” in front of people by not simply buying tests for all Americans. “The most preferable option would be to make these goddamn things free or close to free and make them widely available so people can just pick them up,” she said.

“Rapid tests are hard to get, expensive & could be a key intervention in fighting #COVID19,” Gregg Gonsalves, an associate professor of epidemiology at Yale Medical School, wrote in a tweet addressed to Psaki and Jeff Zients, the White House Covid-19 response coordinator. “Other countries have figured out better ways to get these tools into the hands of their citizens. Do better.”

“Give out rapid tests to every household? Yessss! Of course, we should!” Oni Blackstock, a doctor who once led New York City’s response to the HIV/AIDS epidemic, chimed in on Twitter. “That this appears to be some quixotic idea to the administration is incredibly concerning and a reminder of why we have not been able to get control this pandemic here in the US.”

Michael Mina, a physician who teaches at the Harvard T.H. Chan School of Public Health, estimated more than a year ago that the spread of Covid-19 could be dramatically curtailed if just half of the U.S. population tested themselves every four days with at-home rapid kits that could cost the U.S. government as little as $5 billion.

Mina, who argues that the U.S. government should mail rapid tests to every American household, suggested that Psaki’s comments reveal that the administration is unwilling to take emergency measures to fight the coronavirus pandemic that might challenge the nation’s fundamentally for-profit health care system. “Maybe at some point our FDA, CDC and administration will understand finally this is a PUBLIC HEALTH problem, and not a Medical problem to make $$ off of,” Mina tweeted. “Maybe.”

What Psaki’s comments accidentally drew attention to is that even during a pandemic, Americans are still paying more for health care than their counterparts in countries with socialized medicine.

Experts like Mina and Nuzzo have urged the U.S. government to use its leverage to press test-makers to sell the kits for between $1 and $5 each. But because the Biden administration has tried to work within the constraints of America’s profit-driven system, commercially available rapid tests are considerably more expensive for consumers and often hard to find in stores. Abbott Laboratories’ BinaxNOW kit, for instance, can be purchased by the government for $5 each but costs consumers $11.99 a test at CVS or Walgreens.

The U.S. government’s reticence to use emergency powers to get the testing kits made for less contrasts sharply with the situation in Europe, where more efficient government-run health care systems are the norm.

In September, for instance, the Biden administration struck a deal with Walmart, Amazon and Kroger to sell Abbott’s tests at the discount price of $7 each for three months. But Reuters reports that the British government is paying about $5.80 each for similar test kits (which cost about $2 each to make) that it distributes for free.