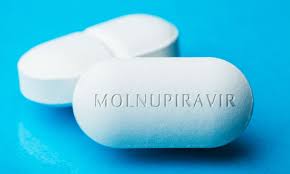 Admittedly  the concern is from an in vitro study. Authors conclude risk “is not zero.” Merck defends itself.

With heightened excitement centering on the recent announcement by Merck that its  investigational antiviral therapy molnupiravir reduces the risk of hospitalization due to COVID-19, the mainstream press has overwhelmingly served as cheerleader. Developed originally by a group within Emory University called DRIVE, the investigational product was licensed by Ridgeback Biotherapeutics. They attempted to secure taxpayer money during the start of the pandemic from the U.S. Department of Health and Human Services’ Biomedical Advanced Research and Development Authority (BARDA). Given the government had already awarded the drug’s preliminary developers money, the acting director at the time—and soon- to-be whistleblower Rick Bright expressed concerns about funding this product reported TrialSite. As it turns out the antiviral induces mutations in SARS-CoV-2 purportedly stopping the virus from replicating itself. However preliminary results from a pivotal study showed efficacy and no immediate safety issues so the company halted the study and applied to receive emergency use authorization (EUA). The mainstream press cheered—led by industry’s main man at the top.

The recent molnupiravir study ended early on preliminary data evidencing that while 14.1% of those subjects in a pivotal Phase 3 clinical trial that didn’t receive the study drug ended up hospitalized or dead due to COVID-19 within 29 days (53 out of 377 participants) only 7.3% of the participants taking molnupiravir were hospitalized and no one in this cohort died. TrialSite notes that while results of this study show promise the numbers still require a lot of cases for someone to benefit. The data has not yet been released nor has there been any substantial review, yet Dr. Anthony Fauci was already out promoting the drug—knowing all too well when he speaks, the markets listen. The nation’s top doctor and medical right hand to POTUS clearly thinks he operates with impunity from all typical standards immediately declaring the results “very impressive.” Fauci did the same thing with Gilead’s remdesivir—in fact he gave that study quite a helping hand—leading to $1 billion or more in the first nine months of the pandemic. The World Health Organization (WHO) Solidarity trial concluded shortly after that since the drug brought no clinical benefit.

TrialSite shares that since the beginning of the pandemic front-line physicians and care providers have called out that the government health agencies such as the National Institutes of Health (NIH) focused not enough attention on antiviral medications, especially repurposed ones that found some positive evidence including hydroxychloroquine, ivermectin, fluvoxamine and even colchicine.

Rather the NIH and other agencies such as BARDA allocated billions of dollars to novel therapeutics developers—right in a time of pandemic crisis—a point in time where doctors needed to provide urgent care for dying patients. Hundreds if not thousands of doctors first embraced hydroxychloroquine and then ivermectin.

While there has been tremendous medical establishment pushback a recent Nebraska Attorney General opinion suggests doctors in that state should have a green light to prescribe those drugs off-label with certain conditions met.

Over the last several months aggressive media, government agencies, and health system campaigned to tarnish drugs such as ivermectin. Not surprisingly, these have coincided with the emergence of potentially expensive drugs such as molnupiravir. The stakes are gargantuan as about 90% of all COVID-19 cases are mild-to-moderate in and simply require effective, comprehensive home care to reduce the number of cases that progress. Given that most COVID-19 cases fall in this category the estimation of market size for an antiviral such as molnupiravir ranges from several hundred million to several billion per annum. The drug costs little to make but Merck plans on selling the drug at $700 per course (5-day treatment) should the investigational product be authorized.

In a recent article in the Philadelphia Inquirer science writer Tom Avril is one of a few reporters that raises any critical perspectives of late. Perhaps this is because the Philadelphia Inquirer is a public benefit corporation owned by the nonprofit Lenfest Institute https://www.lenfestinstitute.org/. Maybe this media outlet has a little more leeway than the others?

Regardless, Avril raises some safety concerns associated with the drug due to a University of North Carolina study in which results showed the drug “induced low levels of mutations in the DNA of hamster cells” suggesting that the investigational product could pose some “slight risk of cancer.” He shared that the authors in the University of North Carolina-led study shared in the Journal of Infectious Diseases that the risks associated with the antiviral “…may not be zero.”

Not surprisingly Avril informs the reader that Merck scientists sent a letter to the journal’s editor suggesting that their heightened concern was misdirected. The observations after all were accomplished in a lab cell culture, and “not relevant to how the drug would affect an entire animal—much less a human being” wrote the Philadelphia Inquirer reporter.

But the UNC preclinical research authors defended their approach calling for more studies while urging significant caution with the drug. Should the drug be authorized for emergency use, the UNC authors urge that only people facing serious risk should be able to access the drug.

Ronald Swanstrom who has a lab at UNC served as a lead author and shared while the drug looked promising, his study team’s observations cannot be ignored declaring “It’s really an unknown risk” further emphasizing “It’s someplace between an inconsequential risk and an important risk.”

Avril goes on to describe how the antiviral experimental drug works. He shares that the “nucleoside analogue” indicates the molecules represent the “Chemical cousins of one of the building blocks of RNA, the genetic material inside the coronavirus.”

So, the drug’s molecules “incorporate themselves into the virus RNA ” triggering mutations, shared Drew University biologist, Brianne Barker. According to the Inquirer’s science writer the actual mutations associated with molnupiravir help direct a process called “error catastrophe” where the molecule serves to essentially disrupt SARS-CoV-2 replication by “adding more and more mutations in chemical ‘bases’ throughout the virus genome until it can no longer copy itself.”

The crux of the concern, identified in the UNC letters, suggests that during their use of the study drug the investigators found that the drug triggered “low levels of mutation in DNA” and thus raised some cause for concern.

But the UNC researchers exposed hamsters in the preclinical animal studies for 32 days. Merck’s scientists contend that this amount of exposure was far greater than the “…3-to-6-hour exposure duration typically used per established guidelines.” Merck declared that when they conducted their preclinical studies on lab rats, they found no such observations for concern.

TrialSite raises the issue of reproductive safety risks in the human clinical trials. If the drug posed no risks for mutation, why would the sponsor limit the drug’s access to those that are not actively trying to conceive children. TrialSite reported concerns expressed by UNC’s Dr. Shuntai Zhou affiliated with the Swanstrom Lab who declared “There is a concern that this will cause long-term mutation effects, even cancer.” Declaring that “Biochemistry won’t lie,” the scientists seemed highly confident that “This drug will be incorporated into the DNA.”

TrialSite also shared pivotal Phase 3 clinical trial inclusion/exclusion criteria including the fact that if males were to participate in the study they would need to abstain from heterosexual intercourse for at least four days after the last dose of molnupiravir. Moreover, pregnant, or breastfeeding females were excluded from the study.  Clearly this criterion indicates some concern.