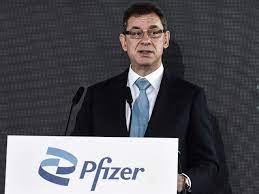 Calls are growing for the pharmaceutical giant to share its vaccine recipes that could save the most vulnerable people in the world.

The coronavirus pandemic has demanded “shared sacrifice” from nurses, bus drivers, teachers, and other frontline workers for the better part of two years. But Pfizer isn’t sacrificing a thing.

Since it produced the first vaccine against Covid-19 to be widely distributed in the United States and other wealthy nations, the pharmaceutical giant has been riding high. It has been widely credited for producing vaccines that have saved lives and proven to be highly effective against coronavirus infections. Yet, even as the corporation has led in the fight against Covid-19 in wealthy countries, it has held a vaccine monopoly, blocking low-income countries from accessing its novel technology, while enriching shareholders at levels advocates for vaccine equity label “obscene.” The corporation is making as much as $1 million in profits every hour from vaccine sales, according to Oxfam, and its executives boast that revenues will expand exponentially in 2022.

Hailing 2021 as “a watershed year” for the company, and predicting more than $50 billion in sales this year for its Covid-19 vaccine and a new therapeutic drug, CEO Albert Bourla declared Tuesday that the opportunities created in this pandemic moment “have fundamentally changed our company forever.”

He’s not kidding. With its bottom line dramatically enhanced by profits from Covid vaccines, overall revenues for Pfizer doubled to more than $81 billion in 2021, and the company is looking to make as much as $102 billion this year. Experts say Pfizer is all but certain to exceed last year’s profits of $22 billion before 2022 is done.

Pfizer’s annual revenues are now “more than the GDP of the majority of countries,” according to an analysis of World Bank data by the group Global Justice Now. “If Pfizer were a country, it would have the 66th largest GDP in the world, ahead of countries like Ethiopia, Kenya, Ghana, Guatemala, Oman, and Luxembourg.”

After banking so much money, and with more on the way, you’d think that Pfizer might finally be entertaining that notion of shared sacrifice. Well, think again.

Pfizer continues to resist calls for it to license its vaccine technology, arguing in a November 2021 statement to Bloomberg, “The industry is already well on its way to produce enough vaccines for the entire world.” Advocates say the drugmaker’s resistance has undermined efforts to develop lower-cost treatments for people in poorer countries. Meanwhile, as of December 21, 2021, Pfizer had provided a paltry 1 percent of its vaccines to low-income countries, according to Oxfam.

Pfizer’s results today are clear evidence of how the company has used its monopoly to enrich its shareholders at the expense of almost half the world’s population who still have no access to lifesaving vaccines.

Thousands of people in Africa are dying every day from COVID because companies like Pfizer have prioritized profits over saving lives. And it’s paying off for Pfizer, raking in as much as $1 million every hour in profit. It is obscene that we have allowed pharmaceutical companies like Pfizer to put their profits before the good of humanity as the pandemic drags on. No corporations should decide who lives and who dies.

Silverman is right. Oxfam and groups such as the People’s Vaccine Alliance have been pressuring corporations that have produced the most successful Covid-19 vaccines—and governments that might regulate or influence those companies—to share the technology and to support efforts to achieve a more equitable distribution of life-saving jabs. US lawmakers, including Senator Bernie Sanders (I-Vt.), have joined other progressive leaders around the world in calling for an end to what Sanders referred to as “obscene” profiteering. “It’s time for these pharmaceutical companies to share their vaccines with the world and start controlling their greed,” said the senator. “Enough is enough!”

There’s been some progress. Moderna announced in October 2020 that it would not enforce the patents on its vaccine during the pandemic, and a year later ended a parent dispute with the US government “to avoid any distraction to the important public-private efforts ongoing to address emerging SARS-CoV-2 variants, including Omicron.” Just last week, the BBC reported that South African scientists have created a copy of the Moderna vaccine, “a move which they say could help boost vaccination rates across Africa.”

But that’s not sufficient progress, explain campaigners who focus on conditions in the world’s poorest countries. While President Biden has reversed the Trump administration’s position and endorsed efforts to waive intellectual property rights for Covid vaccines, the European Union and European countries such as Switzerland are, according to Global Justice Now, “blocking international efforts to enable low and middle-income countries to manufacture vaccines and increase global supplies.”

Frustration with Pfizer’s failure to prioritize health care over profits has only grown in recent days. “Right now, there are billions of people who cannot access Covid-19 vaccines and treatments,” Tim Bierley of Global Justice Now said Tuesday. “Many are in countries with the facilities needed to manufacture mRNA jabs, but Pfizer’s jealous guarding of its patent stands in the way. And we’re seeing thousands of preventable deaths each day as a result.”

Given that Pfizer’s partner, BioNTech, developed its vaccine with debt financing from the publicly owned European Investment Bank and a grant worth roughly $500 million from the German government, and that the company has benefited from generous contract arrangements with governments of wealthy countries, campaigners have ripped into the pharmaceutical giant for failing to bend when it comes to sharing life-saving vaccine recipes.

“The development of mRNA vaccines should have revolutionized the global COVID response. But we’ve let Pfizer withhold this essential medical innovation from much of the world, all while ripping off public health systems with an eye-watering mark-up,” said Bierley. “It’s nothing short of pandemic profiteering for Pfizer to make a killing while its vaccines have been withheld from so many. Pfizer is now richer than most countries; it has made more than enough money from this crisis. It’s time to suspend intellectual property and break vaccine monopolies.

John NicholsJohn Nichols is a national affairs correspondent for The Nation and the author of the new book Coronavirus Criminals and Pandemic Profiteers: Accountability for Those Who Caused the Crisis (Verso). He’s also the author of The Fight for the Soul of the Democratic Party: The Enduring Legacy of Henry Wallace’s Anti-Fascist, Anti-Racist Politics, from Verso; Horsemen of the Trumpocalypse: A Field Guide to the Most Dangerous People in America, from Nation Books; and co-author, with Robert W. McChesney, of People Get Ready: The Fight Against a Jobless Economy and a Citizenless Democracy.