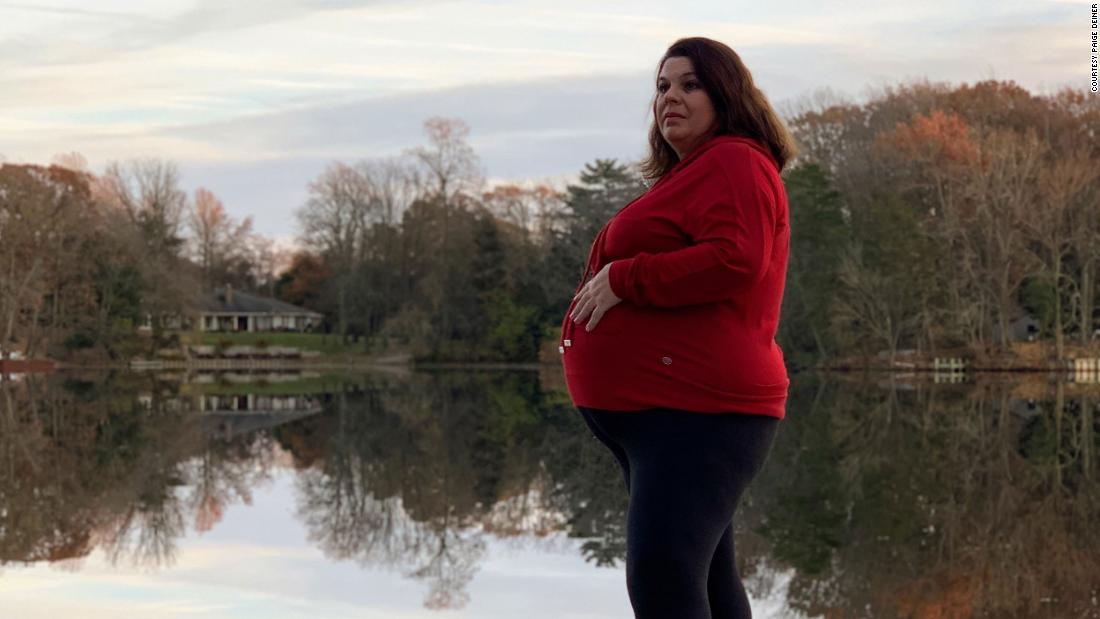 Two years ago, Covid-19 turned the world upside down. While the pandemic is not over, The Best in Us is a series that highlights people whose pandemic stories exemplify the resilience of the human spirit.

(CNN)The doctor pleaded with Paige Deiner to close her eyes and sleep. But she refused to listen. She was terrified.”If I go to sleep, I’m not going to wake up,” she told him.It was an October night in 2021, and Deiner was fighting for her life, and the life of her 24-week-old baby. She was in the intensive care unit of a Delaware hospital after being diagnosed with Covid. She had lost 30 pounds in 12 days after being put on a ventilator. A doctor later told her that at one point he estimated she had a 5% chance of survival.Deiner was trying to calm her nerves when the doctor entered her room. She played Celtic music on her iPhone and watched “Peppa Pig,” an animated children’s television show, on a TV set. But each breath became a painful rasp, and she couldn’t tune out the beeping from the monitors as the doctor urged her to listen.”You have to sleep,” the doctor told her. “If you don’t go to sleep, you’re going to die. You can’t heal yourself if your brain can’t sleep.”Deiner fought back her panic and closed her eyes. She thought it was the end. Her world went dark.

A new kind of near-death experience

Anyone who has read about near-death experiences (NDEs) can imagine what they think happened to Deiner next.Floating through a tunnel to a light in the distance. Hearing celestial music. Greeting loved ones who died many years earlier. These are the type of stories people tell in bestselling books like “90 Minutes in Heaven” and “Proof of Heaven.”Each survivor of a near-death experience shares stories of being spiritually transformed by what they glimpsed in the afterlife. 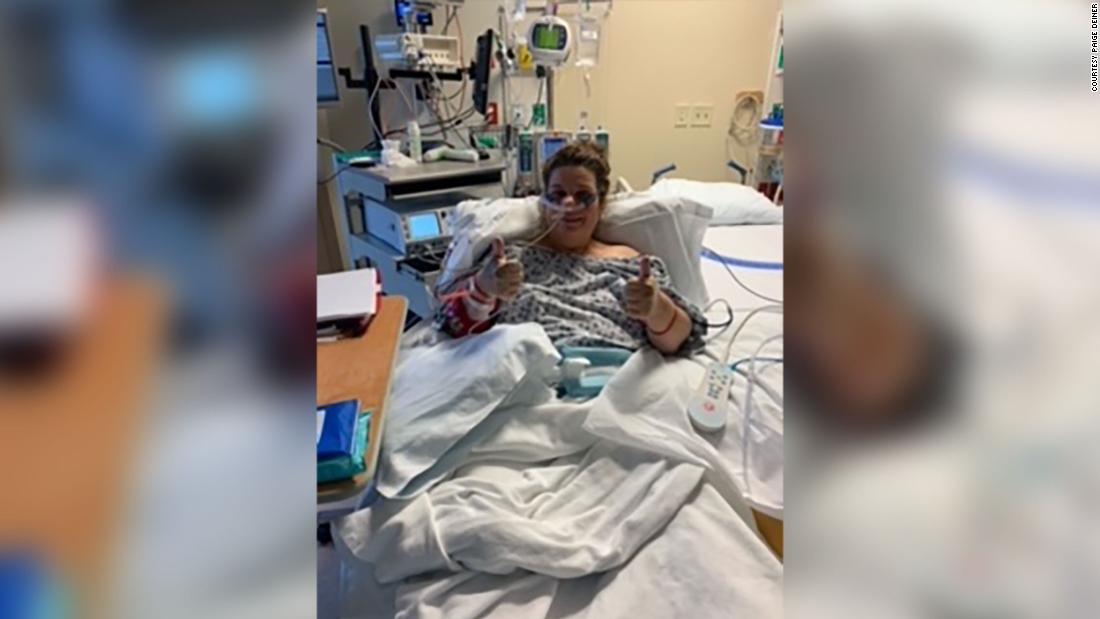 Paige Deiner, in a hospital, while recovering from a near-death experience that changed her perspective.But in the two years since it began, the Covid pandemic has spawned a new category of near-death experiences — recounted by people like Deiner who returned to see the miraculous in the ordinary rhythms of daily life: Being able to taste and smell coffee, hug a child again and see the sun rise after fearing you’d never again hear birds singing in the morning.They were spiritually transformed not by a glimpse of the afterlife but by what they saw in this life, when they were struggling to stay alive after being stricken by Covid.Those type of stories don’t tend to get book or movie deals. Yet people like Deiner, 41, have these incredible stories of survival that can help all of us.Start with the power of gratitude. It’s a cliché for some, but not for many Covid survivors.”I think often of how much we take for granted,” Deiner wrote in a Facebook post not long after she was released from the hospital in December, “from the ability to walk or swallow to breathe.”

Angels all around us

Before she became ill, Deiner was a ball of energy. She was working on her doctorate in Oriental Medicine after getting an undergraduate degree in international relations. She was a mom, a former journalist, a massage therapist living in Lincoln, Delaware and a Reiki master. She once hiked through Central America with nothing more than a backpack.”I was at the top of my A-game,” she says.

You’re dependent on upon people and strangers to keep you alive.

Paige Deiner recalls of her hospitalization

Covid changed all that. She had to learn what many of the greatest spiritual traditions say: We come into the world helpless; we leave it the same way. We need one another.”When you’re really sick, you’re put in a position where you’re powerless,” she says. “You’re dependent on upon people and strangers to keep you alive.”Like many near-death survivors, Deiner met angels. But they weren’t the glowing, winged creatures depicted in books and movies.There was the nurse who patiently cleaned her up after she was covered in vomit and blood.The pastor who came by the ICU, recited the Lord’s Prayer with her and cried with her even though she never met him before.The doctor who urged her to go to sleep. When she opened her eyes eight hours later, “He was still there,” she says.

A prayer for the living

Deiner didn’t think she was going to end up in the hospital. She had already gotten her first vaccine and was about to get her second shot last year when she became sick. As she hovered between life and death in the ICU, she says she started to experience ICU psychosis — a disorder where patients hallucinate, become paranoid, and lose track of time and space.When she was taken off the ventilator, she lost all sensation in her body and found herself floating above herself, looking down at doctors working on her. She could see her body covered with bruises and tubes dangling from her arms.”I couldn’t feel the baby move anymore because I couldn’t feel anything,” she says. “I thought I was dead.”So Deiner did what any child of the Internet age would do when trapped in limbo, not knowing whether she was alive or dead. She texted a friend.

I think I’m dead. I can’t feel my body. I must be a ghost

She doesn’t how she did it, but she somehow dispatched a text to a friend after she came off the ventilator. She was so disoriented at the time that she believed she was texting her friend through a form of telepathy.The friend was Craig Maull, a fellow message therapist interested in alternative forms of spirituality who also repairs roads for Delaware’s Department of Transportation. He got a text from her after not hearing from Deiner for 12 days (“I was down to checking the obituaries three or four times a day,” he said).Her text was simple: “I think I’m dead. I can’t feel my body. I must be a ghost.”“You’re alive. Trust me on this,” he wrote back. “You’ve been under for about 12 days.”Maull gave her a mantra, a traditional Hawaiian meditation to chant and quiet her mind:“I love you. I’m sorry. Please forgive me. Thank you.”The meditation helped save her life, Deiner says. Its power is rooted in its simplicity. She says it helped “bring my mind, body and spirit together.”

One question she cannot answer

Deiner recovered and gave birth in December to a healthy six-pound, eight-ounce son. She named him Soren and says he is “growing like weed.” She says she only realized how close she came to death when a doctor told her later that he had initially given her a 5% chance of survival. 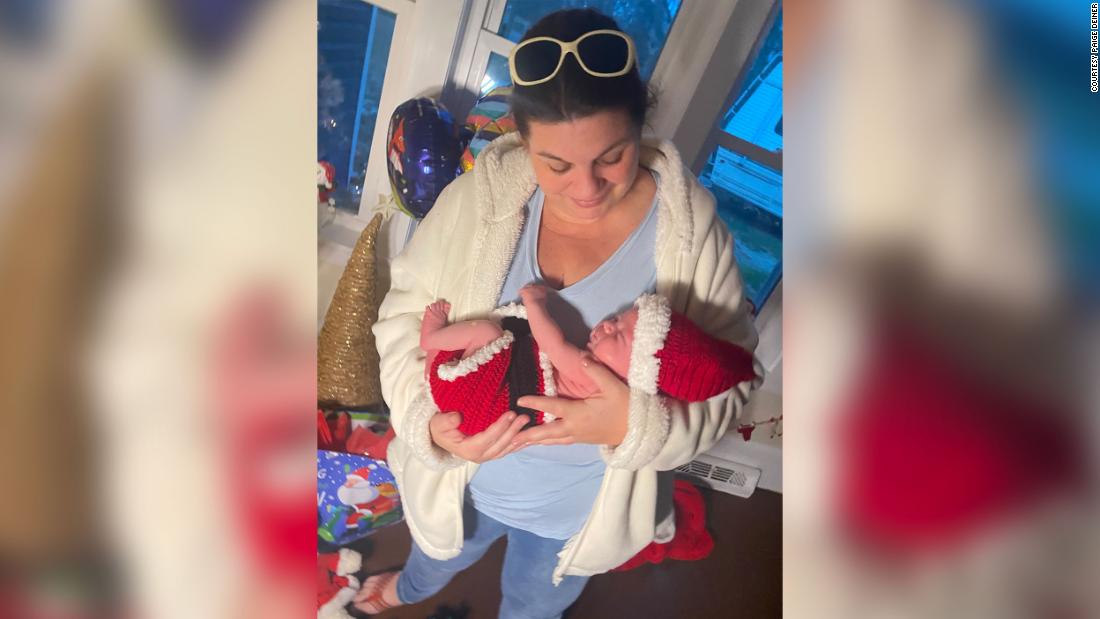 Paige Deiner with her son, Soren. She calls him a “miracle baby.”Hearing that prognosis terrified her. “It felt like cold water, horror and panic all at once,” she says.But Deiner still faces huge challenges. She can’t cut her own food, tie her shoes or change Soren’s clothes because of constant pain in her hands. She has trouble walking and needed therapy to learn how to swallow again. Her sense of taste and smell is gone.The nerve damage from her illness still lingers, and she’s in constant physical therapy. She depends on her daughter, Isabella, 15, for help.”It’s hard. I’m not going to lie,” Isabella says. “It’s hard to watch someone struggle. It’s hard to constantly drop things and help her. But I’m very thankful she’s alive to ask for help.”Deiner’s body may be weaker, but her dreams are bigger. She owns a massage, wellness and yoga center, but wants to do more. She says wants to get a degree in Eastern medicine to help others. She thinks of moving to a small town in an undeveloped country to provide medical care. She can’t envision going back to her life the way it was before.Almost a million Americans have died from Covid. Many of us have lost parents, siblings, friends, co-workers — the sudden absence of people who in the words of the poet Billy Collins have “left a shape of air walking in their place.”For Deiner, there’s still one mystery about her illness that she can’t answer: Why did she survive when so many others died?”What do I say? It wasn’t my time. I had more people praying for me. I’m really lucky to have good medical care,” Deiner says. “I have no idea.”But Deiner says she can answer that question in part by how now she chooses to live.”I feel a profound sense of responsibility,” she says. “I was given a second chance of life. I have to live a life in a way that’s honorable for the people who didn’t get a chance, and for the people who will never walk, talk or breathe on their own.”