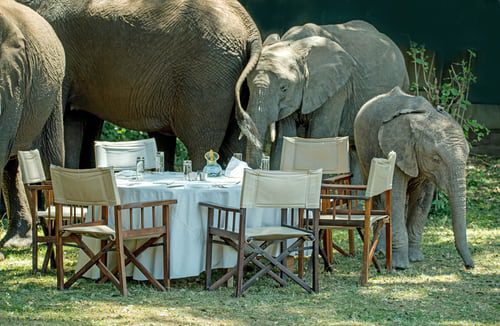 First Published by BizNews on September 14, 2021

While citizens focus on the latest issue the government directs our attention to, many of us have lost sight of the big picture and grown accustomed to severe limitations on our rights like the proverbial frogs in hot water. As a number of countries now seek to focus the discussion on further coercive measures and even mandatory vaccination, PANDA is increasingly aware of the elephants in the room, the topics no one is talking about.
The Infection Fatality Rate

According to the World Health Organisation, the mean infection fatality rate (“IFR”) for COVID-19 is less than 0.2%. This is the percentage of people infected with SARS-CoV-2 who die. That data has now been fleshed out in more detail in a recent paper. Across all countries, the median IFR and the infection survival rate were as follows (rounded to two decimal places):

That is the extent of the problem that public health policies like lockdowns and mandatory vaccines are solving for. And this is the first elephant no one is talking about.

Before a report from members of the United States House Foreign Affairs Committee found that, “there is a preponderance of evidence that the coronavirus leaked from the Wuhan Institute of Virology”, healthcare “experts” were adamant that the virus had come to humans from bats. At the onset of the outbreak, Denmark culled 17 million minks to prevent them passing the virus on to humans and the CDC confirmed that even domestic cats and dogs can spread the virus to humans.

The “animal reservoir” no longer attracts much attention in the media and it is the second of our elephants in the room. When one recognises that the virus has been circulating in animals possibly for hundreds of years and that it can make the jump to humans at any time, the myth of “Zero-COVID” – eliminating COVID-19 from the planet through vaccination – is revealed. Even if we were able to vaccinate every human, we cannot possibly vaccinate every creature in the animal reservoir. Even if we were to vaccinate every human and every animal, the vaccine does not stop infection or transmission. The virus will always be with us.

Fearmongers don’t like counterfactuals. As the virus took hold, most governments told us that we would only be saved by lockdowns, masks and giving up hard-won human rights. Sweden said, “We’ll stick to the plan, thanks.” Sweden did very little to try to stop the virus. It did not lock down, Swedes did not wear masks, most schools remained open, few businesses were shut. For more than a year, Sweden’s demise was predicted. Time Magazine said that Sweden’s “experiment of not implementing early and strong measures to safeguard the population … is almost certain to result in a net failure in terms of death and suffering.”

It was not Sweden that was conducting an experiment. Sweden followed the plans that had been prepared all over the world for dealing with respiratory pandemics. Lockdowns are the experiment.

Sweden’s economy has performed better than any other in Europe in 2020 and shows spectacular growth in 2021. That performance has not been at the expense of lives.

Comparing mortality across countries is difficult given the differences in the way countries count deaths. Sweden is in 39th position on the Worldometer rankings in terms of deaths per million from COVID-19 – ahead of countries like the UK and the USA where harsh lockdowns were implemented. However, it is easy to manipulate death data to make people afraid. Simply use very sensitive tests to “diagnose” the virus and use very inclusive definitions to decide which deaths are linked to the virus. In Sweden if you tested positive for COVID and died 29 days later, you were counted as a COVID death. That wasn’t the case in all parts of the USA for example. However, one constant metric is “all-cause mortality”, i.e. the total number of people that die from all causes in any year. What does Sweden look like?

Sweden’s all-cause mortality in 2020/2021 was unchanged from prior years. 2019/2020 was only slightly above average, probably explained by the lower than usual preceding year. If there hadn’t been a magnifying glass on COVID-19 infections, no one in Sweden would have noticed a pandemic. The reason? There were not actually that many deaths from COVID-19; there were simply a lot of deaths “with COVID-19”, most of which took place amongst those at high risk of death. Life expectancy in Sweden is about 82 years. Around 26% of deaths were of people over 90 years old, about 67% were over 80 and 89% were over 70. Less than 1% of those who died were under 50. Let that sink for a moment. In Sweden, where there were essentially no lockdowns, less than 1% of the victims who were captured by a very broad definition of deaths with COVID were under 50 and more than two thirds of the deaths occurred in people who had lived about as long as they were expected to live.

Countries that imposed the novel lockdown policy do not look like Sweden. South Africa imposed lockdowns before the first COVID death occurred. It has one of the highest excess death rates in the world, despite imposing one of the harshest and longest lockdowns. It also has a government that has been caught manipulating the excess deaths data to generate the highest possible death numbers. The USA similarly fared badly. The only conclusion to draw from this is that the lockdown experiment and other poorly-conceived public health responses killed people who did not need to die. Cancelling sports and closing gyms makes people less healthy, causing the number 1 COVID comorbidity – obesity. Making people miserable and afraid causes the number 2 COVID comorbidity – fear and anxiety-based disorders.

COVID-19 vaccinations are voluntary in Sweden. Sweden does not try to diminish the side effects of the vaccines, but refers citizens to the manufacturers’ documentation which also lists serious side effects. Sweden promises citizens that, “If you are offered a vaccination against COVID-19, you will be able to decide for yourself, based on the available knowledge of the disease and the vaccine. You will also be given information about the vaccine before you need to make a decision.” This is called informed consent and it is a basic principle of medicine that other countries have ignored. Sweden tells its citizens openly that vaccines will not stop the pandemic rather than telling people that normality will only return when everyone has been jabbed. Sweden has delivered enough vaccines to cover about 50% of the population since it began rolling out vaccines in December 2020. It has zero deaths currently.

It turns out Sweden was a country to emulate, not to disparage. It turns out that you don’t need to vaccinate the population to control COVID-19; you just need to do what centuries of science told us to do.

Israel was one of the first countries to vaccinate a significant portion of its population. Over 78% of the population eligible for vaccination have had two shots and more than 10% of the Israeli population has now received a third vaccine shot. And yet, Israel is seeing a surge in cases and deaths. At the time of this article, Israel has the highest number of per capita COVID-19 cases in the world.

Unlike COVID vaccines, flu vaccine performance has always been judged over a full season. Pfizer’s claim of 95% effectiveness of their vaccine was measured only two months after administration. The trial designs also exhibit numerous manipulations, including the problem that they were selected from healthy young people who are at negligible risk from Covid.

Waning vaccine immunity is a known problem for influenza vaccines and certain studies have shown near zero effectiveness after only three months. In early July, Israel reported that COVID vaccine efficacy against infection and symptomatic disease, “fell to 64%.” By late July it had fallen to 39%. Vaccines are not eligible for approval by the FDA if efficacy is less than 50%.

The story is similar in the US. Recently, the CDC issued a report confirming a decline in vaccine effectiveness observable in their data too. Pfizer initially promised vaccine efficacy for up to six months and the CDC is now recommending a booster shot starting 8 months after the second dose of an mRNA vaccine (either Pfizer-BioNTech or Moderna).

Waning immunity and the real life experience of Israel is the fourth elephant in the room. Citizens in most countries are taking the vaccine on the basis that they will be subjected to two shots at most. In fact, countries that mandate COVID-19 vaccines will be committing their populations to vaccination every 6 months. Certain of the risks attached to the vaccines are faced each time they are administered.

People who have recovered from COVID-19 are the next elephant in the room. Society has nothing to gain from vaccinating recovered people. In most countries, recovered people already constitute a significant portion of the population.

One sees many academics and other “experts” claiming in the media that vaccinated people are less likely to transmit COVID-19 than the unvaccinated or that vaccine immunity is stronger than infection-induced immunity. These claims are almost never referenced and most of those making these claims are funded by pharmaceutical companies or foundations with vested interests in vaccines. They will not readily admit that the vaccines’ target market is not 100% because it impacts them financially.

Next time your company or government tells you that you need to get vaccinated so that you don’t infect those around you, ask them what science they rely on to make that statement. Companies all over the world are setting themselves up for massive liability claims by forcing their workers to get vaccinated without having any scientific evidence for the benefit they claim exists. A study by the University of Wisconsin that was published on 31 July 2021 deals the coup de grace to any coercive or mandatory vaccination policy. “We find no difference in viral loads when comparing unvaccinated individuals to those who have vaccine “breakthrough” infections. Furthermore, individuals with vaccine breakthrough infections frequently test positive with viral loads consistent with the ability to shed infectious viruses.” This means that a vaccinated person is just as infectious as an unvaccinated person. The vaccines therefore only protect the people who take them – and no one else.

Taken in the round, the elephants in the room expose the absurdity of mandatory vaccination schemes and of coercive measures to vaccinate. A large percentage of our population has a more robust immunity than the vaccine can offer and already pose less of a risk to society than vaccinated people will pose. We cannot rid the world of COVID given the animal reservoir and the practical impossibility of vaccinating everyone. The vaccines cannot stop COVID since they do not stop infection or transmission and we see in other countries that the virus continues to circulate in vaccinated populations at pre-vaccination levels. We also see that normal mortality rates have been achieved in countries that applied tried and tested policies for responding to respiratory viruses rather than novel lockdowns. Low hospitalisation and death rates were also achieved in countries with low vaccination rates. The vaccines provide protection for the person taking them; not for people exposed to vaccinated people. There is no rational basis for mandatory vaccination schemes and any court that is properly informed of the science and not misled by pro-vaccine propaganda will undoubtedly find that the limitation of citizens’ rights are not reasonable, justifiable or proportionate.

Sidenote: Please note that we have linked to all of the science confirming the statements made in this article, unlike others in the media who make claims that are not referenced. You can find those materials by clicking on hyperlinked words.