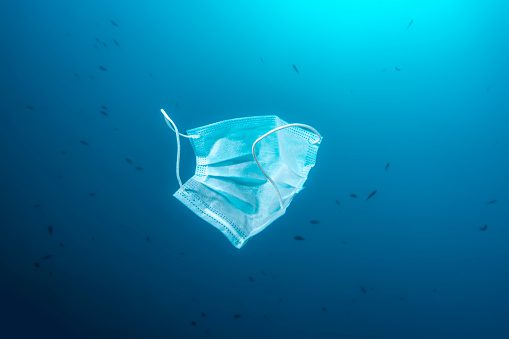 COVID-19 has resulted in over 8 million tons of mismanaged plastic waste around the world as of August, researchers reported.

Nearly 90% of the excess plastic waste generated during the pandemic came from hospitals. Only 7.6% is from individual PPE (personal protective equipment) usage and 4.7% from packaging, according to modeling estimates by atmospheric scientist Yanxu Zhang, PhD, of Nanjing University in China, and colleagues.

They reported that the treatment of plastic waste is not keeping up with the increased demand for plastic products. “Pandemic epicenters in particular struggle to process the waste, and not all the used PPEs and packaging materials are handled or recycled,” the group wrote in the Proceedings of the National Academy of Sciences.

“Better management of medical waste in epicenters, especially in developing countries, is necessary,” the researchers urged.

Nearly half of all mismanaged plastic waste was produced in Asia, they found. Additionally, Asia’s rivers transported over 70% of the mismanaged plastics that end up in oceans; the Shatt al-Arab, Indus, and Yangtze rivers together have carried nearly 13,000 tons of pandemic-related plastic.

The problem generally comes down to a combination of lax environmental laws governing waste disposal and inadequate waste disposal infrastructure in developing countries, said environmental scientist Eric Brevik, PhD, of Southern Illinois University at Carbondale, in an email to MedPage Today. Brevik was not involved in the study.

“I have seen waste management in the rapidly developing BRIC countries [Brazil, Russia, India, and China], and though they often have good intentions in the hospitals, the infrastructure just isn’t there to support consistent, good practices. It’s even worse in the countries with almost no infrastructure — medical waste will often end up piled up outside clinics until someone decides to burn it, releasing dioxins and other air pollutants,” commented sustainable healthcare researcher Cassandra Thiel, PhD, of NYU Langone Health in New York City.

“Healthcare facilities in the U.S. generate far more waste, but these waste streams are heavily regulated. We have proper technologies (think: sharps boxes), waste hauling companies, and waste treatment pathways that ensure most of our waste is handled safely and securely,” Thiel said.

In the U.S., however, waste management continues to be a source of inequity, with waste management facilities disproportionately located in communities of color. “Because of the location of waste transfer stations and end-stage treatment facilities in poorer communities with less political capital, increased waste will just increase pollution at these sites, even just from running the trucks in and out of these sites,” according to Thiel.

Of the 8 million tons of mismanaged plastic waste generated globally, approximately 25,000 tons will make it into the oceans via major rivers, Zhang and colleagues estimated, noting that by the year 2100, most of the mismanaged pandemic-related plastics that entered the ocean will either be on beaches (70%) or in the seabed (28.8%).

About 1.56 million face masks were deposited into the ocean in 2020, according to another report.

Zhang’s group note that one limitation of their study was the lack of accurate data on waste generated during the pandemic. As a result, their estimates of plastic waste had high variances.