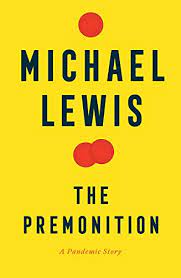 The Premonition — A Pandemic Story, by Michael Lewis, should be required reading for anyone with a serious interest in the pandemic. Better still, it is so well written, by such brilliant in depth deconstruction of complex subjects, that it reads like a thriller and is almost impossible to put down.  Lewis is the best-selling author of Liar’s Poker, Moneyball, The Big Short, The Fifth Risk, and other similar depth analysis thrillers.

The Pandemic tells the story of a small eclectic group of “brave patriots,” in Lewis’s telling, who were the first to see the true risk that Covid-19 posed.  They were also the first to recognize that social distancing and other behavioral interventions could slow or stop the spread of the virus, the first to create a complex computer model of how it behaved so one could plug in different assumptions, and the first to try to bring the threat to the attention of the Feds.

A central premise of Lewis’s deeply researched book will be debated — how fair he is to the Centers for Disease Control, which comes out very poorly in his telling.  In fact, the CDC comes out as broken at best and politically craven at worst.  And when this little band of Lewis’s heroes realized the CDC wouldn’t and couldn’t move fast enough to contain the virus, they turned to California in the hope of getting Governor Newsom to lead the way.  Newsom did, indeed, do just that, but not before his Administration made a disastrous pick to lead the Department of Public Health and blocked the expected ascension of Charity Dean, MD, one of the true heroes of Lewis’s story.  Dean was the take-no-prisoners director of public health for Santa Barbara who was brought to Sacramento by the previous state public health director as her deputy director and intended successor.  Newsom broke with the tradition of selecting a director who had been a California county public health director.  He brought in a former CDC staffer who had no knowledge of California.  It was a critical error that has not been widely appreciated.

But it isn’t just the CDC that is broken in Lewis’s telling.  In fact it is the entire American public health system from soup to nuts.  The fragmentation of responsibility of national and state public health staff, their underfunding, the role of the pharmaceutical industry, and much more.  We know this won’t be the last pandemic — or even the last serious variant of this one.  The deep question of how to fix American public health hangs unanswered like the sword of Damoclese at the end of The Premonition.  In fact, one is left with a profound prem/onition that this won’t be the last American public health tragedy — not only for pandemics but also for all the other public health threats in  a world of “cascading crises,” as President Biden has rightly described it.
The deepest question is one that Lewis doesn’t ask.  Is The Premonition just a preview of coming attractions in the global polycrisis world in which we live?