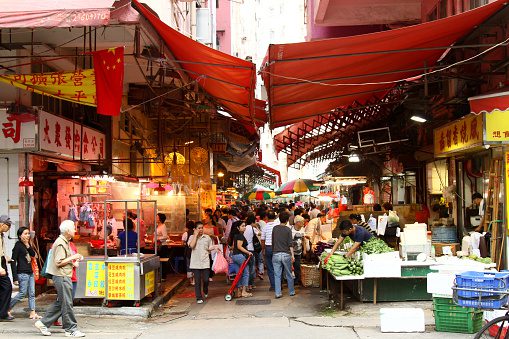 How a veteran virologist found fresh evidence to back up the theory that covid jumped from animals to humans in a notorious Chinese market—rather than emerged from a lab leak.

Michael Worobey hasn’t always been certain about where covid originated. During the pandemic, the University of Arizona professor has studied how the virus changes over time, and was among a group of 18 influential scientists who signed a letter in May calling for further investigation to help prove or disprove the theory that SARS-CoV-2 emerged through a possible lab accident.

Now he’s published a new study in Science that suggests that the earliest diagnosed covid case was incorrectly understood—and that Wuhan’s Huanan wet market was almost certainly the site of a spillover of the SARS-CoV-2 virus from animals to humans, rather than a lab leak. His intervention, and growing confidence in the natural spillover idea,  is likely to re-ignite the debate around the hunt for the origins of covid.

Drawing on myriad sources, including peer-reviewed papers, insights from epidemiologists who had access to first-hand information, and media reports, he tried to determine whether bias crept in when clinicians in Wuhan were trying to understand the viral outbreak.

What he found—not only that there was no obvious bias, but also that many of the first diagnosed cases of covid were either people who worked at the market or lived nearby—has settled his mind that the virus is unlikely to have emerged from a lab leak and that the market was the site of a spillover from animals.

Here’s how he did it.

“A soft spot for wild theories”

Huanan, a once-bustling market in central Wuhan visited by thousands of shoppers every day, has been the heart of the heated and often acrimonious debate over the pandemic’s origins. Closed as a result of the pandemic, many of the earliest covid cases were linked to the market—but not all of them.

It was also a notorious site with the potential to be a breeding ground for disease.

In October 2014, officials at the Wuhan Centre of Disease Control and Prevention took Edward Holmes, a virologist at the University of Sydney, to visit the market, where people could buy live animals and have them slaughtered on site. Several restaurants nearby were famous for serving yewei (“wild taste”) from animals that weren’t just freshly killed, but wild. Holmes and his Chinese host strolled through rows upon rows of stalls that sold live animals—snakes, bamboo rats, raccoon dogs—kept in cages stacked on top of one another. It wasn’t a particularly busy day, but the place stank of urine, blood, and feces, Holmes says.

The market, which used to receive thousands of visitors each day, is near a kindergarten, a couple of shopping centers, and dozens of residential tower blocks. It’s also just half a mile from the Hankou railway station, through which many thousands of people pass each day, peaking at 100,000 during chunyun, the Spring Festival migration, every January. (Both SARS and covid-19 spiraled out of control during chunyun.)

“They showed me the market as a possible place that could trigger future outbreaks,” says Holmes.

“I used to be one of the people who thought [Huanan] was just an amplifying event… we have to look at the totality of evidence.”

Huanan’s precise role in the spread of covid-19 has been a point of contention since the beginning of the pandemic. One in three of the 174 patients who fell ill in December 2019 had been to the market, but infectious-disease epidemiologists like Harvard’s William Hanage have argued that it could be a red herring. “When people see clusters of atypical pneumonia, they tend to look for the nearest market. They go ‘Oh, look, market! It must be the market!’” he says. And, he adds, if that assumption was incorrect, it could have led to a cycle which disproportionately emphasized the Huanan’s role, while a large number of cases elsewhere in the city were overlooked. “You tend to look hard at where you expect to find cases and don’t look hard at where you don’t,” says Hanage.

Worobey—known for having “a soft spot for wild theories”, according to David Robertson, a virologist at the University of Glasgow, UK—has a track record of tackling hotly debated theories around dangerous viruses. In the early 2000s he traveled to the Democratic Republic of Congo to study what became the conspiracy theory that HIV may have crossed into humans as a result of contaminated polio vaccines: He was later part of a group of scientists who helped refute it.

During the pandemic he says he’s been trying to “poke holes” in the natural origins theory by asking if the apparent link of early covid-19 cases to Huanan is real or a mirage.

That’s why Worobey decided to take up this question of whether so-called “ascertainment bias” had crept in when clinicians in Wuhan were trying to understand the viral outbreak.

No one can find the animal that gave people covid-19

Here’s your guide to the WHO-China search for the origins of the coronavirus.

From the patchy, fragmented information he could get, Worobey traced how the first 20 covid-19 patients in three hospitals in Wuhan were diagnosed (a total of 27 cases were deemed suspicious by December 30). He found that the clinicians identified cases based on the disease’s clinical manifestation, especially features of their CT scans of the lungs, regardless of their prior exposure at Huanan. It turned out that nine of them were workers at the market, while one patient who had no market exposure had friends who worked there and had visited his home.

This had all happened before public health officials in Wuhan turned their attention to Huanan, and therefore couldn’t have skewed the diagnosis, the study concludes: the market was indeed central to the earliest cases, not a result of doctors seeing more SARS-CoV-2 in the places they spent more time looking.

Worobey also claims that the patient who previously had been thought to have the first documented case of covid-19—and who had no prior exposure at Huanan—may have been mistakenly tagged that way. The WHO had previously reported that a 41-year-old accountant had been diagnosed with covid-like symptoms on December 8, 2019, making him what is known as the “index case.” But according to a Chinese media video report, hospital records Worobey found online, and a scientific paper, the man was diagnosed initially with a dental problem and did not develop covid-19 symptoms until eight days later.

If that individual caught covid later than originally thought, that would mean that a woman named Wei Guixian, who fell ill on December 11, was actually the first documented covid-19 patient. Wei sold shrimp at Huanan.

Worobey’s detective work also provides vital evidence related to another puzzle about the early spread of the disease.

Previous studies looking at the genome sequences from some of the earliest diagnosed patients show that the virus had already diverged into at least two lineages by December 2019: lineage A, from the earliest reported patients who had never visited Huanan in the weeks before they fell ill, and lineage B, from those who had. Confusingly, lineage A genomes—rather than their Huanan-linked counterparts—seem to be more closely related to the bat relatives which are thought to be their ultimate ancestor.