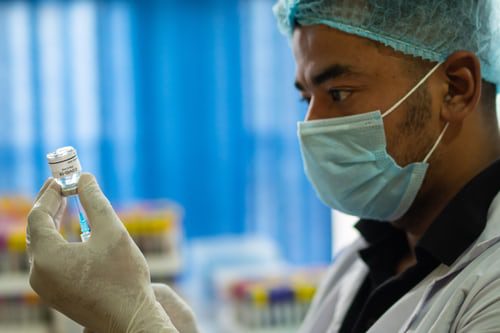 Why does the entire American society need a COVID-19 vaccine if evidence increasingly indicates natural immunity is just as if not superior in boosting immunity? After all, by May 2021, a third of the U.S. population, estimated at 44% of adults aged 18-50, had already been infected, suggests Centers for Disease Control and Prevention (CDC) data. With the confluence of massive numbers of already infected persons on the one hand and mounting evidence as to superiority of natural immunity, why haven’t health agency decision-makers factored natural immunity into decision making associated with the prioritization of vaccination? Why can’t the CDC at least establish a protocol that those that have been infected wait at least eight months? Or why not follow the recommendation of Florian Krammer,  Icahn School of Medicine, who suggested to the New York Times that it would be prudent to administer only one dose to individuals who have already recovered from a SARS-CoV-2 infection. Or there is the well-known Marty Makary, the outspoken Johns Hopkins University professor and MedPage Today editor who recently declared why vaccinate everyone—even those with immunity—when the focus should be on using them where they can save lives? The reality is that America’s health authorities are increasingly under the microscope for the decisions they are making. The CDC, Food and Drug Administration (FDA), and of course POTUS, and not surprisingly, the industry appears most certainly eager to just round up and vaccinate everyone, regardless if they have been previously infected and their subsequent natural immunity levels.  Something is terribly off in America, and thankfully a talented journalist delved into the matter with the results published in the prominent The BMJ.

A freelance journalist has taken up this topic up in a comprehensive piece published again in The BMJ. Jennifer Block digs deep into this matter, penning a comprehensive and compelling argument that the powers-that-be start investigating the infected population in more detail. It’s time for health agencies to do their job, not only studying natural immunity response strength but also durability. Ms. Block implies in her article that the current public health apparatus may be making an irrevocable mistake, leading up to what could be large-scale unnecessary safety risks combined with a perpetuation of health inequity issues as the current paradigm doesn’t leave much assistance to the world’s poorest countries.

Block provides significant evidence that natural immunity must be taken seriously. She demonstrates while other countries at least attempt to factor in natural immunity into their analyses, it’s as if the concept didn’t exist in America.

Of course, a counterargument is that America just isn’t good at tailored, data-driven approaches and that rather only a universal vaccination offers “a more quantifiable, predictable, reliable and feasible way to protect the population.”

Hogwash! The entire movement of medicine moves to data-driven, precision, and personalized medicine, as we enter the age of data and directed value rather than the mass-produced generic treatments of yesteryear? Is convenience and a streamlined economy a reason to run roughshod over real data, true science, and possibly large numbers of people’s health?

TrialSite recently reported that a number of prominent medical boards are now colluding to severely punish any licensed physician that dares utter a negative word about the current vaccines or the vaccination program. TrialSite let it be known that these medical licensing bodies were essentially putting doctors on notice: forewarned—be quiet about the vaccine or risk one’s license and, therefore, their economic livelihood.  Yet the very groups pushing the mass vaccination agenda don’t effectively use science themselves, while they accuse any critics of scientific blasphemy.