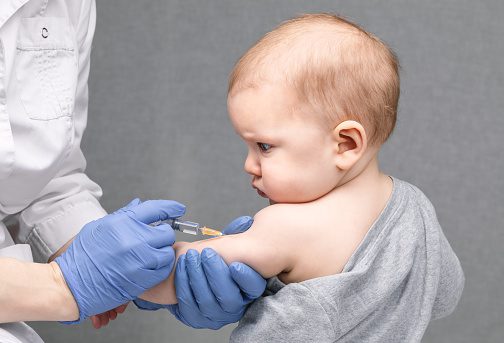 The vaccines seem safe for children and are likely to protect against severe illness. But data on efficacy are thin, and most children have already been infected.

t’s a moment many parents have anxiously awaited for months: Children younger than age 5 are now eligible for vaccination against the coronavirus, among the last Americans to qualify.

Without access to vaccines, parents of young children have confronted nearly impossible choices since the pandemic began. Many children were kept from schools, family gatherings and other activities, and deprived of normal childhood experiences. Now all that could change.

On Saturday, the Centers for Disease Control and Prevention recommended the Moderna and Pfizer-BioNTech vaccines for children as young as 6 months. The decision means shots will be administered for the first time to these young children, perhaps as early as Tuesday.

Sunny Baker, 35, a mother of two in Oxford, Miss., said she vaccinated her older daughter, Hattie Ruth, 5, at the first chance, and has been eagerly waiting for her 2-year-old daughter, Alma Pearl, to qualify.

But Ms. Baker may very well be in the minority: A recent Kaiser Health poll found that only one in five parents will get their young children vaccinated immediately. Many plan to hold off for now.

As the pandemic stretches into a third year and Americans weigh the risks they are willing to live with, the C.D.C.’s decision puts parents of young children on the spot.

Vaccines have lost some of their potency against infection with new variants, though they continue to offer protection against severe illness and death. And huge numbers of Americans were infected during the Omicron surge, contributing to a mistaken sense among many that the battle was over.

Shifting advice has also contributed to a lack of enthusiasm. Daryl Richardson, 37, of Baltimore, said he had no plans to vaccinate his three children, in part because of the constant changes to the number of doses recommended.

“First it was one shot, and then it was a booster, and another booster,” he said.

After navigating the perils of the pandemic with their children for so long, parents now face new questions, some so complex they have stumped even regulators and experts. Which vaccine is better? How well, and how soon, will they work? And why bother, if the majority of young children have already been exposed to the virus?

Both the Pfizer-BioNTech and Moderna shots are considered safe for young children, and both yield blood levels of protective antibodies similar to those seen in young adults. But neither delivers the miraculous protection provided by the adult vaccines in the pandemic’s early days.

Moderna’s vaccine seems to produce a strong immune response in young children, and its protection is complete within 42 days after the first dose. But the vaccine causes fevers in one in five children, and fewer providers are likely to offer it as an option over Pfizer’s vaccine.

The Pfizer-BioNTech vaccine is more familiar and produces fewer fevers, but children will need to get three doses to be protected from the virus. While it takes 90 days to achieve peak protection, the effect may last longer, compared with Moderna’s regimen.

“The implementation of these two rollouts is going to be incredibly challenging,” said Katelyn Jetelina, a public health expert and author of the widely read newsletter, “Your Local Epidemiologist.”

“There’s going to have to be a lot of proactive communication about the difference between the two and the implications of taking one over the other,” she said.

A head-to-head comparison of the two vaccines might provide some answers to parents, but that is neither possible nor advisable, experts said in interviews. There are just too many differences in the way the vaccines were formulated and evaluated.

“It’s really going to be impossible to say one is better than the other,” said Dr. William Towner, who led vaccine trials for both Moderna and Pfizer at Kaiser Permanente in Southern California.

The choice may depend more on whether parents are willing to go for three doses versus two, and which vaccine their providers have at hand, he said.

Many providers are unaccustomed to Moderna, having relied so far on only the Pfizer-BioNTech vaccine. About 350 million doses of that vaccine have been administered to Americans overall, compared with 223 million doses of the Moderna vaccine and about 19 million of the Johnson & Johnson vaccine.

For young children, states have so far ordered 2.5 million doses of the Pfizer vaccine and 1.3 million of the Moderna vaccine. Those numbers are lower than expected, given the 18 million children in this age group.

Uptake has been slow even for older children. The Pfizer-BioNTech vaccine was authorized for children ages 5 to 11 in November, but fewer than 30 percent in that age group have received two shots.

The vaccines overall have proved to be very safe, but many parents remain hesitant for a range of reasons. Some are wary because the vaccines are relatively new, or because they perceive the risk from Covid-19 to be negligible for their children.

Still other parents have moved on from the pandemic.

In Middletown, Ohio, some parents were more concerned with staying cool during the summer heat wave than with risks from the coronavirus. Tori Johnson, 25, is unvaccinated and said she did not intend to immunize her two daughters, 7-year-old Liliana and 9-month-old Rosalina.

Life had already returned to normal, she said.

Simone Williams, 32, said she was hesitant to vaccinate her 1-year-old twins, Caidon and Arissa, and 4-year-old, Bryan. “I would get it for them if it were required, but otherwise I’m not in a hurry,” Ms. Williams said.

Some pediatricians were preparing to explain to parents the merits of getting the vaccine. Even routine immunizations are a fraught topic in many parts of the country.

Pediatricians “have struggled with this for many, many years with the influenza vaccine and the standard dosing for the measles, mumps, rubella and varicella,” said Dr. Lindsey Douglas, a pediatrician and the medical director of quality and safety at the Mount Sinai Kravis Children’s Hospital in Manhattan.

In some ways, the odds were stacked against use of the vaccines in the youngest children.

The Moderna and Pfizer-BioNTech vaccines both offered spectacular estimates of efficacy in adults, far beyond expectations, and raised hopes for a virus-free future.

But while the vaccines were gradually being tested in younger children, the virus rapidly morphed, each new form more elusive and challenging than the ones before.

The newest versions of the Omicron variant have evolved to partially dodge not just the two-year-old vaccines, but even the immunity produced by an infection with the form of Omicron that circulated just a few months ago.

The original efficacy estimates in adults were on the order of 95 percent. That figure has given way now to 51 percent for two doses of Moderna’s vaccine in children 6 to 23 months, and just 37 percent for children ages 2 through 5.

As low as that may seem, two doses of Pfizer’s vaccine did not even meet the Food and Drug Administration’s bar for an immune response, justifying the agency’s decision in February to delay evaluating the vaccine until the company had tested three doses.

“As a mom, I think it’s unacceptable that it’s taken so long to get our little ones the vaccine,” Dr. Jetelina said. But “as an epidemiologist, I also know the value of doing clinical trials rigorously, and finding the right dosage.”

Based on the data, the F.D.A. this week authorized two doses of the Moderna vaccine and three doses of Pfizer-BioNTech as the “primary series” for young children.

If officials determine that even the youngest children need booster shots against future variants, children will need to get a third dose of Moderna and a fourth of Pfizer.

In news releases and in data reported to federal regulators, Pfizer has estimated an efficacy of 80 percent for three doses of its vaccine. But that calculation was based on just three children in the vaccine group and seven who received a placebo, making it an unreliable metric, the C.D.C.’s advisers noted at a meeting on Friday.

“We should just assume we don’t have efficacy data,” said Dr. Sarah Long, an infectious diseases expert at Drexel University College of Medicine. But Dr. Long said she was “comfortable enough” with other data supporting the vaccine’s potency.

Parents of the youngest children may be more willing to opt for a Covid vaccine if it can be offered alongside other routine immunizations. Dr. Towner said either vaccine would be better than none, but he predicted that more parents may opt for Moderna.

Some parents will need no convincing. In Alexandria, Va., Erin Schmidt, 37, said the news was “life-changing” because her family has been living in a “sort of alternate isolated reality.” After vaccinating her 2-year-old daughter, Sophia, she plans to pop open a bottle of champagne, take Sophia to a museum and “blow her mind about the world.”

Brendan Kennealy, 38, of Richfield, Minn., said after his daughters, 4-year-old Hazel and 1-year-old Ivy, are vaccinated, he and his wife Jocelyn, 35, would drive them up to the lake town of Duluth, where they plan to try new restaurants and attend an outdoor concert by a local folk band called Trampled by Turtles.

The family has had to avoid spending time indoors with his mother, who has lupus and is vulnerable to severe Covid. His children missed the state fair, quit swim lessons and gave up gymnastics.

“I’ve gotten very, very happy a few times in the past, and then they pulled the rug back out,” Mr. Kennealy said of the F.D.A.’s halting progress on vaccines for children.

“Those jolts of hope were so unnecessarily defeating,” he added. “Until we’re at the Walgreens or wherever we take them to get their pokes and their Band-Aids, I’m trying to keep that at bay.”