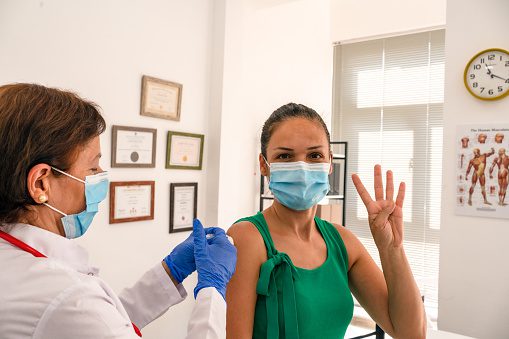 Once, twice, and now three times, many people in the U.S. have rolled up their sleeves to get vaccinated against COVID-19.

But as daily infections break records and hospitals across the country near capacity during the Omicron surge, many people have raised questions about whether they’ll need to get a fourth dose.

Some wonder whether their waning antibody levels from a booster shot last September will be protective during this period. Others question whether or not their immune systems would even benefit from continual boosting in the future.

While there is no indication that a fourth shot would be harmful, experts said it is still unclear whether the U.S. should offer another jab to the general population. However, they agreed that additional vaccine doses may begin to provide diminishing returns, and may not be an effective public health strategy moving forward.

“I think it would be premature to move at a wholesale public health policy level to a fourth dose without more data,” said Gregory Poland, MD, director of the Mayo Clinic’s Vaccine Research Group in Rochester, Minnesota.

High-risk populations are a different story, Poland noted, and fourth dose initiatives have already entered the conversation to protect vulnerable groups in both the U.S. and other countries. As of last week, Israel is the first country to offer a fourth dose to people who are immunocompromised, medical workers, and individuals over age 60. Initial data show that antibody levels after a fourth dose increased by five-fold a week after the shot was administered.

Some Americans with weakened immune systems will also become eligible for a fourth dose as early as this week. In an effort to quash infections with Omicron, the CDC updated its booster recommendations for immunocompromised people, shortening the interval between a third and fourth dose to 5 months.

People in this cohort are either born without fully functioning immune systems, or take medications that prevent their bodies from producing an antibody response. In these cases, experts said it makes sense to offer a fourth vaccine dose.

“Depending on the degree of immunocompromise, many people … tend to not make very good antibodies, and some make none,” said Anne Liu, MD, clinical associate professor of immunology and allergy and infectious diseases at Stanford University in California. A fourth shot is likely to help people who produce low levels of antibodies get to higher levels of protection, and should be offered, Liu added.

The Goal of a Fourth Dose

While the uncertainty around future outbreaks or the emergence of new variants makes it difficult to determine whether or not a fourth dose will be necessary for more people in the U.S., experts said it is critical to understand the goal of a fourth jab before offering it.

Vaccines have two functions: to block infection and to block disease. In immunocompetent people who have received two doses and a booster shot, the current COVID-19 vaccines have “excellent disease-blocking activity,” Poland said.

But with Omicron — a variant characterized by its large number of mutations and high transmissibility — the vaccines’ ability to block infection is less effective.

Alessandro Sette, Dr. Biol.Sci, an immunologist and professor who runs a lab at the La Jolla Institute for Immunology in California, told MedPage Today that if the goal of an additional dose is to provide people with “neutralizing, sterilizing immunity, where no infection can possibly occur,” a very high level of antibodies is needed. But as antibodies wane, “that’s not the way most situations work,” he said.

Data from Israel show that after a third dose of the COVID-19 vaccine, antibodies began to wane around the 10-week mark, leaving individuals susceptible to infection with Omicron. Although preliminary evidence shows a sharp increase in antibody production following a fourth dose, it is unclear how long those antibodies will remain at high levels.

The important thing is that people have expanded memory B-cell and T-cell immunity to block severe disease and hospitalization — which has continued to be the case with the current vaccines, Sette said.

“The fact that you have memory B cells that can restart an antibody response at any point in time is what matters,” he said in an interview.

Sette compared memory B cells to soldiers, shooting bullets (or in this case, antibodies) at an enemy pathogen. If there is no enemy in sight, it would be a waste of ammunition to keep shooting. But the memory of what to do when an enemy arises allows the antibodies to be redeployed. “That is protection,” Sette emphasized.

It is possible, however, that an additional jab could be used to quell infections and therefore transmission, though that may not result in the magnitude of benefit some would hope for, experts said. As frequent vaccination could provide diminishing returns, it may not be worth rolling out four or more jabs to the mass population to keep cases down.

While concerns have been raised that fourth doses or continued booster shots as the pandemic goes on may be harmful, or cause a sort of immune system fatigue, experts said that immune system exhaustion is an unlikely possibility.

“We are exposed to pathogens on a regular basis, over and over again,” Liu said. “It’s not like we lose our immunity to them, and not like our T cells get exhausted from that.”

Immune system exhaustion may occur in other settings, such as in the case of chronic diseases like HIV, Sette said. As no one is advocating for continued boosting every other day, he added, it’s not likely that the immune system would become overwhelmed by boosters that are spread out over time.

However, another possibility is a concept called “original antigenic sin.” This occurs when the immune system refines its response to an original strain of a pathogen, making its response against subsequent variants less effective.

Liu said that we have not seen much evidence that original antigenic sin will be detrimental to our vaccine responses against new variants. Regarding both Delta and Omicron, higher antibody levels that have been generated by mRNA vaccines against the original spike protein have been able to overcome the reduced specificity of those antibodies against mutated strains.

“So far, we have gotten lucky in that way,” she said. “Hopefully, our luck doesn’t run out.”

Omicron has already shown an ability to evade immunity in some capacity, and it is not impossible that a future variant could do the same, outsmarting our current vaccines. “The virus is going to continue to change every time we give it the lottery ticket of being able to be transmitted through populations,” Poland said.

He added that there is a possibility that we will move towards seasonal COVID-19 vaccines designed to provide immunity against specific strains in the future. Additionally, nasal or oral spray immunizations could arm people with antibodies at the portal of viral entry, and potentially reduce transmission, he noted.

Until more data are collected or future variants emerge, a fourth dose for the widespread population is not on the table. Currently, the U.S. remains focused on ensuring that people who are eligible receive their third dose of the COVID-19 vaccine, CDC Director Rochelle Walensky, MD, said in a media briefing last week. (Though West Virginia has requested permission to begin doing just that.)

Liu said that without oversimplifying complications that may arise as the pandemic continues, the most effective public health strategy is to ensure that more people get their primary series of immunizations.

“I think that focusing on reducing variant formation around the world is good for everybody,” she explained. “The more people who get two to three doses, the better position we will be in.”