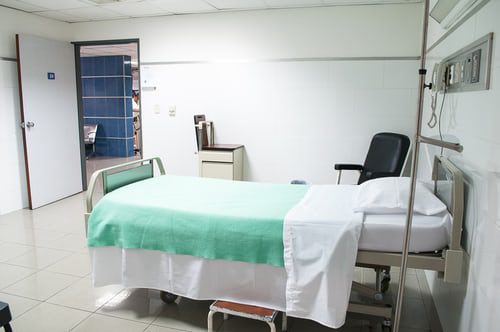 The Omicron variant appears somewhat less severe than previous strains of COVID-19, but it is still landing plenty of Americans — especially the unvaccinated — in the hospital. At present, more than 155,000 people with COVID are hospitalized, which is a higher number than last winter’s surge.

There are numerous reports that hospitals across the country are buckling under the load. Omicron has pushed “hospitals to the brink in two dozen states.” In Texas, Wisconsin, Rhode Island, and Alabama, more than 90% of ICU beds are filled.

Even these stark numbers obscure the severity of the problem in some localities. Biden recently announced that “over 800 military and other federal emergency personnel have been deployed to 24 states” as part of the administration’s “hospital response efforts.” There are 14,000 National Guard Members deployed in a similar capacity in 49 states.

This crisis is impacting many Americans, whether or not they contract a severe case of COVID-19. Hospitals that are at or near capacity are forced to postpone other procedures. These delays can be deadly.

The Omicron surge has put a renewed focus on common sense steps Americans can take to alleviate the crush on hospitals. Vaccines, for example, are extremely effective at keeping most people out of the hospitals. If more Americans were vaccinated, hospitals would not be under strain. If more people wore high-quality masks in public indoor settings, that would also help.

But there are important questions that are attracting little attention: Why does America not have enough hospital beds to deal with this emergency? Why does an increase in 155,000 patients, about 3,000 additional patients per state, push the system to its breaking point?

Why did all of these hospital beds disappear? There are a variety of factors but they all come down to one thing: money. In recent years there has been a dramatic consolidation of non-profit and for-profit hospital networks. These networks also consolidated the health care system vertically, gobbling up physician groups and outpatient centers. Then they relentlessly sought to increase revenue and reduce costs. In many cases, that involved reducing the number of beds (or closing hospitals completely) and diverting as many patients as possible into other forms of care.

This process of wringing out excess capacity makes sense if you are operating a typical business. If you run a bagel shop, you don’t want to have extra bagels lying around at the end of every day. It will destroy your margin. Running hospitals with little excess capacity, however, leaves the country unprepared for a public health emergency.

This has coincided with a vertical acquisition of other health care facilities by hospitals. For example, “[b]etween 2016 and 2018, hospitals acquired more than 8,000 doctors groups.” Larger hospital networks seek to increase revenue and reduce costs by diverting patients from hospitals to these other locations, where they can be treated more cheaply.

Diverting patients from hospitals is not necessarily a bad thing. No one wants to go to a hospital, and often alternative locations have better care and are more convenient. But, as the number of hospital beds declines, the cost savings are not being passed down to consumers.

Vertical and horizontal consolidation means there is little competition for hospitals and related services that hospitals also own. By 2016, “90 percent of all metropolitan areas had highly concentrated hospital markets.” The lack of competitors has allowed hospitals to raise prices for outpatient services “four times faster than what doctors charge.”

In other words, hospitals are getting rid of hospital beds because they are making more money diverting patients elsewhere. The focus on the bottom line applies both to for-profit and non-profit hospital networks, which operate nearly identically.

UPMC is a non-profit network of 40 hospitals and other health care facilities in Pennsylvania and neighboring states. Jeffrey Romoff, who led UPMC for 30 years until he stepped down in 2021, was accused “of putting market dominance and revenues ahead of the best interests of patients and the community.” UPMC’s new CEO, Leslie Davis, is seeking more growth. “We don’t do anything small. It’s like go big or go home,” Davis said in an interview with a local media outlet. According to its most recent tax filing, UPMC pays its CEO over $9 million and dozens of executives in excess of $1 million annually.

But allocating health care resources, including hospital beds, based on “market dynamics” instead of public health needs, is a serious problem in the context of an international pandemic. Capacity is thin everywhere, but is particularly scarce outside of “higher-income areas where many patients have private health insurance.”

Private equity gets into the hospital business

Another factor driving the reduction in hospital capacity is increased investment by private equity firms. Over the last 10 years, “private equity firms like Blackstone, Apollo Global Management, The Carlyle Group, KKR & Co. and Warburg Pincus have deployed more than $340 billion to buy healthcare-related operations around the world.”

Some private equity managers are buying hospitals and seeking to extract as much cash as possible — regardless of the impact on patients or the hospital’s long-term prospects. These managers “typically load the companies they buy with debt” and then “slash the companies’ costs to increase earnings and appeal to potential buyers down the road.” Hospitals that don’t quickly show significant profits are shuttered.

Some private equity managers have sought to directly exploit the pandemic. Popular Information reported on one such incident in April 2020:

In 2017, Cerberus Capital Management, a private equity firm, acquired Easton Hospital, a facility located in Pennsylvania’s Lehigh Valley, north of Philadelphia. Shortly after acquiring the hospital, Cerberus, through its Steward Health Care subsidiary, sold the property (but not the hospital itself) to a real estate investment firm, Medical Properties Trust.

Easton Hospital’s property was packaged with seven other hospitals, which netted Cerberus $304 million. But now Easton Hospital had to pay rent to operate on the land it had owned for the last 127 years.

In addition to rent, Cerberus also loaded up Easton Hospital with debt. Faced with all these additional costs, Easton Hospital’s financial condition quickly deteriorated. In March 2020, Cerberus sent a letter to Pennsylvania Governor Tom Wolf demanding the state assume “all operating expenses and liabilities of Easton Hospital” or the company would “proceed immediately on planning to close the facility.”

With the pandemic bearing down on the state and hospital beds already in short supply, Wolf had little choice.

On March 27, the state announced it would provide Easton Hospital with an infusion of $8 million to keep the hospital open until at least June 30, 2020. But Cerberus said it was promised more money, and threatened to close the facility at midnight…To avoid shuttering the hospital, Pennsylvania relented, and agreed to pay Cerberus $8 million in exchange for a promise to keep the “facility open and operating for at least the next four weeks.”

The CEO of Cerberus is Stephen Feinberg, who has a net worth of $1.6 billion. Cerberus ultimately sold Easton Hospital in June 2020 to St. Luke’s University Health Network, which owns 12 hospitals and 300 outpatient facilities. The pandemic has made hospitals less attractive to private equity investors since it has limited lucrative elective surgeries.