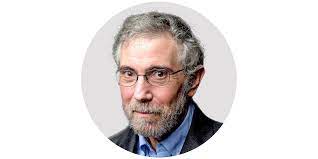 Will Republicans once again nominate Donald Trump for president? Or will they turn to Ron DeSantis instead? I have no idea.

What I do know is that anyone imagining DeSantis as a more sensible, saner figure than Trump — a right-wing populist without the reality-denying paranoia — is delusional. DeSantis hasn’t gone down all the same rabbit holes as Trump, but he has gone down some of his own, and his descent has been just as deep.

Above all, DeSantis is increasingly making himself the face of vaccine conspiracy theories, which have turned a medical miracle into a source of bitter partisan division and have contributed to thousands of unnecessary deaths.

Let’s back up and talk about the story of Covid-19 vaccines so far.

In the spring of 2020 the U.S. government initiated Operation Warp Speed, a public-private partnership intended to develop effective vaccines against the coronavirus as quickly as possible. The effort succeeded: By December 2020, far sooner than almost anyone had imagined possible, vaccinations were underway. (I received my first shot the next month, on Jan. 28, 2021.) And yes, this was a success for the Trump administration.

Link to article in the New York Times by Paul Krugman