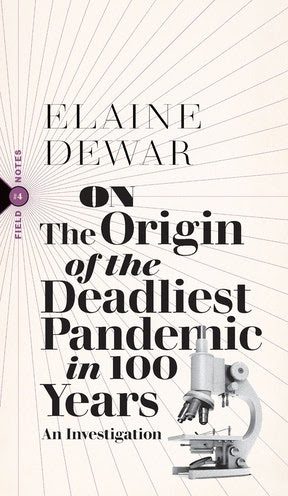 As the pandemic broke in January of 2020, author Elaine Dewar began clipping and saving news articles because the coverage reminded her of the 2003 SARS outbreak in Toronto, when Canadian authorities gave false assurances to Canadians that they had nothing to fear. For the next year and a half, she followed the story as it developed—scanning medical journals and contacting scientists for comment—while filing requests for government documents to understand how the pandemic began.

In the process, Dewar caught prominent scientists in flagrant moments of dishonesty and uncovered a tangled network of financial conflicts that were often ignored by media outlets invested in promoting science and dismissing the possibility that research in Wuhan, China, may have caused the deaths of millions. Her new book, “On the Origin of the Deadliest Pandemic in 100 Years,” is her account of that journey.

Elaine Dewar is a Canadian author, journalist, and television story editor who has won nine National Magazine awards, including the President’s Medal, and the White Award. Her first book, “Cloak of Green”, was a classic examination of environmental politics, while her second “Bones: Discovering the First Americans” investigated the science and politics surrounding the peopling of the Americas, and won a special commendation from the Canadian Archaeological Association.

We caught up with Dewar at her home in Toronto to discuss what she learned about the intertwining of money and science and how China has worked for decades to become one of the world’s most powerful—and perhaps most dangerous—players in virus research. “Since Xi Jinping became President, he made it clear that the military and the civilian researchers in strategic areas, such as biotechnology, had to work together,” Dewar tells The DisInformation Chronicle. “There was no distinction between civilian and military research, from that point forward.”

This interview has been condensed and edited for clarity.

DICHRON: Your book isn’t just about the science. You made it very personal, by pulling in some of your family history and explaining how you went about trying to understand what happened by reading news articles and research studies, contacting people, and filing government information requests for documents.

DEWAR: There’s two ways of doing nonfiction journalism or books. One is to disappear from the story so no one really understands your thinking as it evolves. This was a really unusual circumstance, because during the pandemic, it’s not possible to get on a plane and go interview people; not possible to go knock on doors in Ottawa. It’s not possible even to get people in their labs to answer the phone, because mostly they were not there, or were ducking and not responding to emails.

DICHRON: On Jan. 20, 2020, President Xi Jinping finally admitted that the COVID-19 virus was spreading person-to-person. And you notice something really funny about Chinese scientists:

The same day Xi Jinping made his announcement, several groups of China’s scientists submitted five articles on the new coronavirus to three of the world’s leading peer-reviewed scientific journals, The Lancet, New England Journal of Medicine, and Nature, as well as to a lesser journal edited in China but with editors in the US called Emerging Microbes and Infections (eMI).

In retrospect, we know that the Chinese government had a wide-ranging propaganda push to downplay any possibility this pandemic started with a lab leak. But you are pointing to an obviously coordinated campaign to control the narrative by Chinese researchers through scientific journals. And one of the most prominent scientists you document spinning information is Shi Zhengli at the Wuhan Institute of Virology.

How did these publications catch your attention?

DEWAR: Because Shi Zhengli was submitting papers, on the same day, which said different things about what was the closest known genome sequence to SARS-CoV-2. And from that point, I have to look at her and say, “What the hell is this?”

That said to me there is either some unbelievable sloppiness or deception. It set me up for asking a whole lot of questions about Shi Zhengli, the operations of the Wuhan Institute of Virology, and China’s veracity and transparency.

DICHRON: At several points, you write about corruption at science journals and that they failed to insist that scientists list their obvious competing interests—and also that journals published studies in a selective manner. You write:

Some—Nature, The Lancet, eMI—turned themselves into platforms for the science equivalent of propaganda. The story of the search for the origin of SARS-CoV-2 makes clear that scientific publishers, and some scientists who should know better, allowed themselves to be corrupted by their desire to stay on the good side of the country that will soon be the largest science funder and publisher in the world—China.

You cannot talk about this pandemic without discussing hidden financial interests of the scientists and how research journals morphed into propaganda.

DICHRON: One of these early publications that dismissed the possibility that the pandemic could have started from an accident in Wuhan was a letter published in Nature Medicine, whose lead author was Kristian Andersen. Here’s how you describe that paper:

The letter was pockmarked with similar weasel words, such as “possible,” “plausible,” and “likely.” Yet for months after its publication … this letter was pointed to again and again as definitive proof that SARS-CoV-2 could only have had a natural, not a lab, origin.

You then point out that several of the co-authors had undisclosed ties to Chinese institutions and had a financial interest in downplaying a lab leak because they wanted more virus research money out of the National Institutes of Health. And Andersen was applying for a grant to the NIH …

DEWAR: He got the grant.

DICHRON: Chinese disinformation was omnipresent. Chinese reporters and scientists were disappeared. At the beginning in late December 2019, Dr. Li Wenliang warned a few colleagues that a SARS virus was circulating in Wuhan, and was then arrested by the police. He later died of SARS and became an online martyr. Here’s how you say China dealt with that:

Orders went out to the Cyber Administration’s hundreds of thousands of paid trolls. These people are teachers, low-level government workers, and students who are paid 25 dollars per post longer than 400 characters, 40 cents for flagging posts for deletion, and one cent per share according to one leaked document.

DEWAR: That is normal currently in China.

DEWAR: It is obvious that the US media focuses intensely on US issues and do not spend as much time as a Canadian would looking farther afield. We’re a different culture.

DICHRON: You also looked at a profile of Shi Zhengli that came out in Scientific American. Many different people have picked apart that article for factual errors, and I was kind of laughing as you described it:

The chance to have Scientific American do a friendly profile of Shi (most Scientific American profiles are friendly) must have seemed like a gift to those in China trying to shape the narrative on the origin of SARS-CoV-2. A nice article in a journal like Scientific American could help bury the argument that the pandemic might have originated in Wuhan. I could imagine the PR people on a Zoom call saying “How could it hurt?”

The reporter who wrote the piece was Jane Qiu who is a freelancer who has written for magazines like Nature, Science, and National Geographic. You write:

Her article on Shi was true to National Geographic’s preferred story form. It was organized around dramatic moments and utterly free of investigative techniques, avoiding mention of the controversies surrounding Shi’s gain-of-function experiments or that the US government was the source of some of Shi’s funding. Instead, Shi was presented as a pandemic hero, as Bat Woman to the rescue.

I have to agree. It was a terrible article, and you describe this incident rather accurately.

DEWAR: I’m sorry. I’m sure that the author will not be happy with that review, but honestly, that’s what I saw.

DICHRON: I just don’t call some of these people journalists. I call them science writers. Their job is to promote science.

DEWAR: That I’ve noticed for a long time. If you read the Nicholas Wade piece in the Bulletin of the Atomic Scientist, he has a level of rage about that type of reporting. He’s basically saying, “Come on, there’s more to writing about science than simply explaining the latest paper that came out in Nature.”

And that’s what they do. They’re explainers; they’re not investigators. They don’t allow certain questions to be raised.

DICHRON: Science Magazine posted their back and forth of questions and answers sent to Shi Zhengli. And you go through her responses quite carefully, and compare her answers to other pieces of information. You then ask yourself if she is telling the truth.

And your answer is, “I had no idea, but I no longer had reason to trust her.”

She has been caught giving false answers so many times. NBC caught her lying about working with the Chinese military.

DEWAR: Since Xi Jinping became President, he made it clear that the military and the civilian researchers in strategic areas, such as biotechnology, had to work together. There was no distinction between civilian and military research, from that point forward.

DICHRON: Going back to reporters, another you mention in your book is Alison Young, who is now a journalism professor. But you discuss her investigative series about lab leaks, to point out that lab accidents are quite common.

Well, this year Alison has published several commentaries in USA Today about how we should not denigrate the idea that this pandemic started from a lab leak. And she points out that some reporters have dismissed the idea as a “conspiracy theory.” She’s the most experienced journalist in North America when it comes to reporting on lab accidents, and yet, she is mostly ignored by all the science writers at Nature, Science, New York Times, Scientific American, etc…

DEWAR: Newsweek is one of the major media operations in the US that actually did try to investigate and did point to the lab leak possibility. To be fair, there were some people doing their jobs. But there were a whole lot of people who were not.

DICHRON: Back in January, the World Health Organization sent a team of “international” scientists to Wuhan to work with their Chinese counterparts and try and figure out how the pandemic started. You write several pages going over the report the WHO later released, and note that they completely dismissed the possibility that there might have been a lab accident. You end with this take:

This was a breathtaking display of arrogance. The report’s authors had treated reasonable concerns raised by other scientists with contempt. They had treated the families of the sick and the dead with contempt.

DEWAR: Every section of that WHO report has umpteen number of references to previously published work to support whatever assertion is being made. But when you get to tiny section in the report devoted to a lab leak possibility there are three references, two of which are entirely inappropriate. In fact, there’s a really significant number of articles about lab leaks that could have been cited, and none of them are referenced.

Honestly, I got to the end of that report and I could feel my blood pressure going up. We now know that the WHO entered into an agreement with the government of China that no lab leak would be studied.