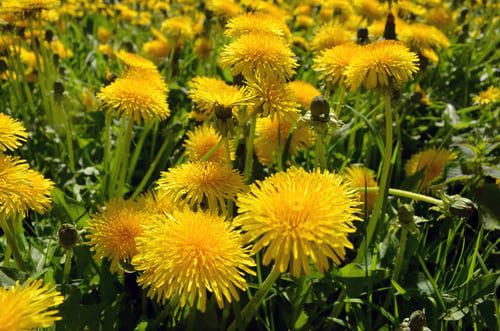 On 11th March 2020, coronavirus disease 2019 (COVID-19), caused by the SARS-CoV-2 virus, was declared as a global pandemic by the World Health Organization (WHO). To date, there are rapidly spreading new “variants of concern” of SARS-CoV-2, the United Kingdom (B.1.1.7), the South African (B.1.351) or Brasilian (P.1) variant. All of them contain multiple mutations in the ACE2 receptor recognition site of the spike protein, compared to the original Wuhan sequence, which is of great concern, because of their potential for immune escape. Here we report on the efficacy of common dandelion (Taraxacum officinale) to block protein-protein interaction of spike S1 to the human ACE2 cell surface receptor. This could be shown for the original spike D614, but also for its mutant forms (D614G, N501Y, and mix of K417N, E484K, N501Y) in human HEK293-hACE2 kidney and A549-hACE2-TMPRSS2 lung cells. High molecular weight compounds in the water-based extract account for this effect. Infection of the lung cells using SARS-CoV-2 spike pseudotyped lentivirus particles was efficiently prevented by the extract and so was virus-triggered pro-inflammatory interleukin 6 secretion. Modern herbal monographs consider the usage of this medicinal plant as safe. Thus, the in vitro results reported here should encourage further research on the clinical relevance and applicability of the extract as prevention strategy for SARS-CoV-2 infection.

The coronavirus disease 2019 (COVID-19) pandemic, caused by the severe acute respiratory syndrome coronavirus 2 (SARS-CoV-2) pathogen, has caused over 123.7 million cases and over 2.7 million deaths worldwide. In the absence of effective antivirals, its treatment and prevention have been limited to general therapeutic modalities and non-pharmaceutical interventions, despite intensive research aimed at developing better drugs.

An exciting new study that appeared recently on the bioRxiv* server describes a specific inhibitor of the virus found in an extract of the common dandelion that could provide a new and fruitful avenue of drug research.

The SARS-CoV-2 virus has undergone a large number of mutations over the pandemic period. Recently, three rapidly spreading and, in some cases, more virulent, strains of the virus have emerged.

These are known as the United Kingdom (variant B.1.1.7), South African (variant B.1.351) and Brazil (variant P.1). All share the defining spike protein mutation N501Y. All three have descended from an earlier strain carrying the D614G spike mutation that has rapidly become dominant.

The South African variant carries two other important spike mutations, K417N and E484K. Early results indicated the D614G mutation might be associated with higher fatality rates, while the conformational change in the spike protein could lead to higher infectivity.

The N501Y and K417N mutations seem to have favorable energetics during their interactions with the host cell receptor for the virus, the angiotensin-converting enzyme 2 (ACE2), suggesting a possibility of higher infectivity.

The same trend is seen during interactions between the spike protein and a natural neutralizing antibody isolated from COVID-19 patients. This raises important concerns about whether the immune response remains protective against these newer variants.

These variants also show resistance to neutralization by existing antibodies, mostly because of the E484K mutation.

In view of this, therapeutics that target the spike-ACE2 interactions may be a successful line of study. The current study focuses on inhibition of the binding of the spike-ACE2 proteins via the spike receptor-binding domain (RBD) in the context of the D614 spike, the D614G mutation, the N501Y mutation, and the triple mutation K417N, E484K, and N501Y.

The common dandelion (Taraxacum officinale) is a perennial, native to warm temperate zones in the Northern hemisphere, and widely distributed across road margins, fields, gardens and any other open spaces where it is permitted to grow.

It is an edible plant and has a reputation in Europe as a medicinal plant, touted to be useful in the treatment of illnesses affecting the liver and gallbladder, the gut, and the joints. Its safety has been the subject of many new monographs.

This plant contains terpenes, phenolics including coumarins and flavonoids, and polysaccharides. The most abundant phenolic compound was chicoric acid. The roots contain an abundance of the non-soluble polysaccharide inulin.