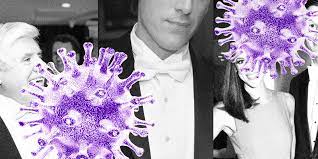 While the COVID-19 vaccines have reduced the number of severe infections and deaths, they haven’t stopped viral transmission. This past weekend, mainstream media now reports, a big elite get-together involving top journalists, the Gridiron Dinner in Washington, DC, required vaccination to attend. Just one problem: the vaccines failed to stop infection en masse.

As reported by Callie Patteson of the New York Post, hundreds of people attended the recent event, including Eric Adams, the Mayor of New York City, who also continues some of the previous Mayor de Blasio mandates targeting municipal workers such as firefighters, police, and others while giving a pass to top entertainers and sports stars. It turns out even Mayor Adams, fully jabbed and boosted, fell to SARS-CoV-2 infection along with 72 other people who attended the event.

The first Gridiron Dinner since 2019—before the COVID-19 pandemic, guests came fully armed with their proof of vaccination against COVID-19; natural immunity wasn’t considered acceptable.

About 99% of the entire Washington DC population received at least one dose of the COVID-19 vaccine, while at least 75% are considered fully vaccinated. The heavily vaccinated Washington DC establishment is getting sick right and left as Omicron and BA.2, highly transmissible forms of SARS-Cov-2, swirl about the DC metropolitan area.

Even though he was fully vaccinated and boosted, Tom Vilsack, Agriculture Secretary, tested positive to COVID-19. Members of the POTUS cabinet also became infected, including Merrick Garland, Attorney General, and Gina Raimondo, Commerce Secretary, following gatherings among the elite of DC.

As reported days ago by NBC News, several of POTUS’ inner circle were infected despite complete vaccination and boosters.

TrialSite has been writing for several months, since the emergence of Delta, on the detection of waning effectiveness in the current batch of early vaccine products. Vaccine effectiveness wanes along with the ever more transmissible variants such as Omicron and the subvariant BA.2. A recent large-scale study in Israel evaluating over 1 million Israelis suggests that those elderly who received a fourth dose experienced superior protection against infection for only four to five weeks. Then the vaccine effectiveness wanes, and while protection against severe infection seems to persist, it’s not clear how long that protection may last.

The whole vaccine effectiveness story becomes ever more questionable given all sorts of seemingly draconian mandates representing government overreach, 100% liability shields against the companies and health care organizations administering the immunization programs, and the tens of billions of dollars (often derived indirectly from taxpayer allocated funds). What about the rights of the health consumer in this pandemic? Are they thrown out the window once the politicians and bureaucrats declare an emergency?

Meanwhile, headline after headline of breakthrough infections may start impacting Pfizer’s bottom line. While the company has ensured record revenues and windfall profits thanks to the pandemic and government mandates, Frasier Kansteiner, writing for Fierce Pharma, reports that some high-profile equity analysts are starting to forecast lower-than-projected sales of vaccines and their antiviral Paxlovid.

Louise Chen, an analyst with investment house Cantor Fitzgerald, shared the company “dialed back its first-quarter sales estimate for Pfizer while keeping its full-year predictions for the company ‘intact.’” Chen declared, “Based on publicly available information from government websites on orders delivered, we believe that consensus estimates…are too high.”

If more negative data about Pfizer’s vaccine surfaces, those estimates could go even lower. TrialSite will monitor for any updates.