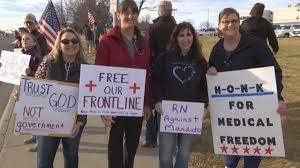 People lined a portion of King Avenue West in Billings on Sunday to rally in opposition of a federal COVID-19 vaccine mandate for health care workers and employees of any company with more than 100 workers.

“We’re opposed to the mandate. Everybody should have the freedom to choose when there’s risk involved,” said Corinne Hammond, a Billings healthcare worker and rally organizer.

The rally drew a large crowd, with people stretching around the corner at 24th Street West to the first driveway entrance to Walmart on King Avenue West. Many held signs condemning “government overreach.”

The rallies were put on by Big Sky Liberty Alliance, a private Facebook group with about 1,300 members from across the state, Hammond said.

The group is headed by five Billings health care workers Kristen Gilfeather, Corinne Hammond, Lori Gilbertlee, Amanda Sieler, and Lauren Zachmann who was not present at the rally. There were originally two groups that popped up near the start of October. They later combined when the group’s administrators became aware of the other.

“I could see kind of what was happening and I was concerned that we would need a platform for health care workers to be able to join together and communicate and support each other. Because I noticed many people that were against this were staying quiet because of fear and they didn’t want to be harassed or bullied,” Hammond said.

The relatively new phrase that insults President Joe Biden made an appearance on a rally sign at a anti federal vaccine mandate rally in Billings on Sunday.
“We’re all holding our breath until that point when we will know if it’s going to be stayed or if it’s going forward as is and there’s a lot of pressure on both sides,” Hammond said.

The rally organizers all agreed that if they were forced to have the COVID-19 vaccine, they would quit their jobs.

“Whatever God puts in front of me. I’ll go wait tables. I don’t care. I’m just not taking this vaccine,” said Lori Gilbertlee.

“Ditto. I don’t know what’s next, but I’ll reinvent myself somehow,” Hammond added.