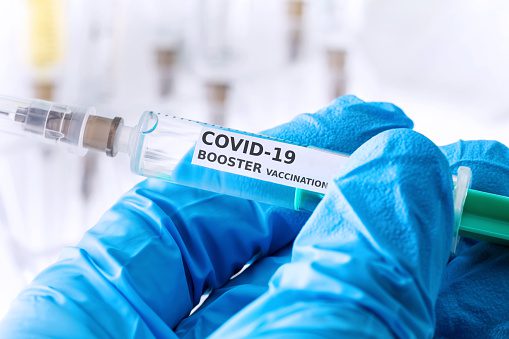 Federal regulators have authorized second booster shots for some people

On Tuesday, the Food and Drug Administration authorized a second booster shot for the Pfizer-BioNTech and Moderna coronavirus vaccines, citing dwindling immunity in older Americans as a new omicron variant gains a firm foothold in the nation.

So should you rush out and get that new booster? And is that even a possibility yet? Here are some answers:

A: Everyone 50 and older, as well as people with certain medical conditions, such as immune deficiencies and organ transplants.

A: Data from Pfizer and BioNTech shows some decrease in effectiveness in the three-shot series — two primary vaccines and one booster — after three to six months. Dr. Peter Marks, the director of the FDA’s Center for Biologics Evaluation and Research, points to “some waning of protection over time against serious outcomes from COVID-19 in older and immunocompromised individuals.”

Q: Should I get one?

A: Following the FDA’s regulatory action, the U.S. Centers for Disease Control and Prevention updated its recommendations to allow a fourth vaccine for these groups of people:

• If you had your third shot more than four months ago.

• If you have a medical condition that compromises your immunity.

Q: If I fit these guidelines, how soon can I get my fourth shot?

A: Check with your doctor but likely this week.  Health-care providers and pharmacies were reviewing the FDA’s announcement on Tuesday morning, and many, such as Kaiser Permanente , said they were waiting for further guidance from federal, state and local officials.

Q: Why isn’t it recommended for everyone?

A: Because people who are older or immunocompromised have a less vigorous response to vaccines, they are likely to need more frequent protection than younger people.

“For most people who have been vaccinated and had one booster,” Marks said, “the original booster shot is continuing to provide you with good protection from being hospitalized or dying.”

Q: What does the research show?

A: So far, there are only three studies of the second booster, all in Israel. So the data is considered preliminary.

The first study, in healthcare workers, was small. It found that this fourth shot boosted levels of protective antibodies. But it had only modest effectiveness — 31% for Moderna and 44% for Pfizer — in preventing infection.

The second study was in 1 million people age 60 or older. It found a four-fold protection against severe disease.

The third and most important study was conducted among people age 60 or older at one of Israel’s large healthcare organizations. It showed a 78% reduction of death from four shots, compared to three shots.

“The huge number of people in these age groups points to an important benefit at the population level,” tweeted Topol.

Q: I’ve had three shots, but also a “breakthrough infection” with omicron. Is the fourth shot necessary?

A: If you had three shots and a breakthrough infection, there’s little need for getting a second booster at this point, according to Dr. Eric Topol, founder and director of the Scripps Research Translational Institute in La Jolla. You’ve got some hybrid immunity, which gives you added protection.

Q: Is it better to wait for an omicron-specific booster?

A: Opinions are divided. A new targeted vaccine is expected in May or June. So far, animal studies suggest there may not be a significant advantage — but the data may look better in people.

People who get a second booster now would likely be eligible for an updated booster later, Marks said.

According to Topol, it’s safe to wait if there is little virus where you live and work.

But Dr. Robert Wachter, a professor and chair of UC San Francisco’s department of medicine, recommends high-risk people get the jab as soon as they are eligible.

“Seeing folks try to time 2nd boost  — ‘If I wait, small risk now but cases are low & a June boost will cover a fall surge, but there might be more Paxlovid, or better booster, or new variant…’ — reminds me of trying to time the stock market. Which rarely works,” he tweeted.

Q: I haven’t yet had my first booster — is now the time?

Only 67% of Americans age 65 or older have gotten the first booster, according to CDC data. About 95% have gotten one shot and 89% have gotten two shots — but those shots offer incomplete protection.