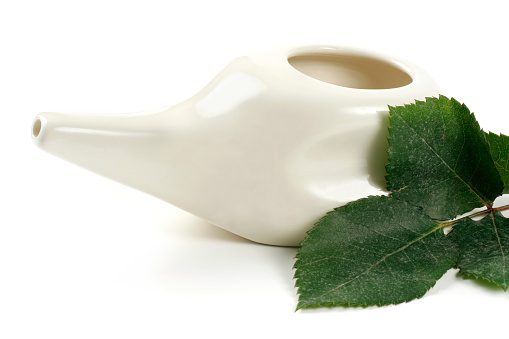 They say the technique that can be used at home by mixing a half teaspoon each of salt and baking soda in a cup of boiled or distilled water then putting it into a sinus rinse bottle is a safe, effective and inexpensive way to reduce the risk of severe illness and death from coronavirus infection that could have a vital public health impact.

“What we say in the emergency room and surgery is the solution to pollution is dilution,” says Dr. Amy Baxter, emergency medicine physician at the Medical College of Georgia at Augusta University and corresponding author of the study in Ear, Nose & Throat Journal.

“By giving extra hydration to your sinuses, it makes them function better.

If you have a contaminant, the more you flush it out, the better you are able to get rid of dirt, viruses and anything else,” says Baxter.

“We found an 8.5-fold reduction in hospitalizations and no fatalities compared to our controls,” says senior author Dr. Richard Schwartz, chair of the MCG Department of Emergency Medicine. “Both of those are pretty significant endpoints.”

The study appears to be the largest, prospective clinical trial of its kind and the older, high-risk population they studied — many of whom had preexisting conditions like obesity and hypertension — may benefit most from the easy, inexpensive practice, the investigators say.

They found that less than 1.3% of the 79 study subjects age 55 and older who enrolled within 24-hours of testing positive for COVID-19 between Sept. 24 and Dec. 21, 2020, experienced hospitalization. No one died.

Among the participants, who were treated at MCG and the AU Health System and followed for 28 days, one participant was admitted to the hospital and another went to the emergency room but was not admitted.

By comparison, 9.47% of patients were hospitalized and 1.5% died in a group with similar demographics reported by the Centers for Disease Control and Prevention during the same timeframe, which began about nine months after SARS-CoV-2 first surfaced in the United States.

“The reduction from 11% to 1.3% as of November 2021 would have corresponded in absolute terms to over 1 million fewer older Americans requiring admission,” they write. “If confirmed in other studies, the potential reduction in morbidity and mortality worldwide could be profound.”

Schwartz says Baxter brought him the idea early in the pandemic and he liked that it was inexpensive, easy to use and could potentially impact millions at a time where, like other health care facilities, the Emergency Department of the AU Health System was starting to see a lot of SARS-CoV-2-positive patients.